Countries rejecting Syrian refugees because they are Muslims are fuelling the Islamic State of Iraq and the Levant (ISIL) and other armed groups, the top UN refugee official has said.

Antonio Guterres, a former prime minister of Portugal, said on Monday that such actions increase the chances of armed groups recruiting followers.

“When people say they cannot receive Syrian refugees because they are Muslims, those that say it are supporting terrorist organisations and allowing them to be much more effective in recruitment of people,” he told reporters.

Much of the rhetoric connecting refugees and acts of violence has come from the US, where Republican hopeful Ben Carson has likened Syrian refugees to “a rabid dog running around your neighbourhood,” and said admitting them would put Americans at risk.

Meanwhile, his rival candidate Donald Trump has suggested shutting mosques to prevent Muslims in the US from becoming radicalised.

At least one of the men who carried out suicide attacks in Paris last month came through the Balkans to Western Europe posing as a Syrian refugee, counter-intelligence and police sources have said.

But even before the Paris attacks, many European countries were already talking about closing their borders to refugees – or actually doing so – because of the sheer weight of numbers.

After the attacks on the French capital on November 13, several US state governors said they would close their doors to Syrian refugees.

The House of Representatives also voted overwhelmingly to suspend President Barack Obama’s programme to admit 10,000 Syrian refugees and intensify the process of screening them.

‘The more the chances’

Guterres, who was speaking at the launch of a record $20.1bn UN humanitarian appeal for 2016, said he was sympathetic to governments’ impulse to rely on counterterrorism strategies, but added that it would be an illusion to think that counterterrorism and military action alone would solve the problem.

“An essential part of this is to convince the potential recruits of terrorist organisations that that is not the way to express their own anger or their own concerns or their own perspectives,” said Guterres.

Attacks in Europe may be linked to one or two people who had entered with the huge refugee influx, but it was essentially a homegrown problem that would not be solved by closing borders, he added.

“The more it is said or the more it is done in hostility to Syrian refugees because they are Muslims, the more the chances for (ISIL) and other groups to recruit within the borders of European countries people to do the kind of nasty things we are now witnessing.” 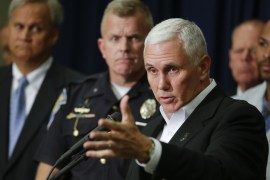 US civil rights group says Mike Pence’s attempts to suspend resettlement of refugees in US state is unconstitutional.