Female bombers blew themselves up and killed at least 15 others on an island in Lake Chad with security officials accusing the armed group Boko Haram of carrying out the deadly assault.

More than 130 people were also wounded in the attacks by at least three young women on a busy market on Saturday on the island of Koulfoua on the Chadian side of Lake Chad.

“The provisional death toll is 19 dead, including the four kamikazes, and 130 injured,” state TV reported.

It was earlier reported at least 27 people were killed and 80 wounded.

Two of the blasts rang out from the centre of the market and a third in the street as people fled, security sources said.

No one claimed responsibility for the attacks, but officials pointed fingers at the armed group Boko Haram from neighbouring Nigeria.

Chad’s government instituted a state of emergency in the Lake Chad region last month, saying the area had become a gathering point for Boko Haram fighters.

More than 5,000 soldiers have been deployed on islands and lakeside villages there.

Earlier this year, thousands of people fleeing Boko Haram sought refuge on the island although it was not immediately clear if they were still based there.

Boko Haram, which has led a six-year armed campaign in Nigeria, has stepped up attacks this year in Chad, Niger, and Cameroon after those countries agreed to fight the group. An estimated 20,000 people have been killed. 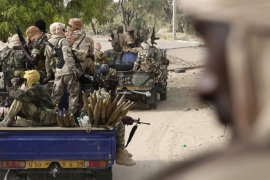 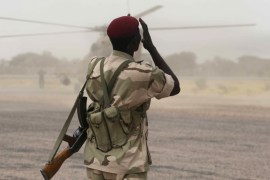 At least 37 killed in triple bombings at a fish market and refugee camp believed to be carried out by Boko Haram group.