The future of Syrian President Bashar al-Assad can only be determined by the Syrian people, a top Iranian official said on Sunday, adding his fate was a “red line” for Tehran.

Assad’s future role has been the biggest sticking point in talks aimed at finding a solution to the nearly five-year-old civil war that has killed more than 200,000 people and displaced millions.

Iran – the Syrian president’s main backer – has resisted attempts by regional leaders and their Western allies to oust Assad.

Assad, who lost vast swaths of territory to armed rebels, received a boost after Russia began a military offensive in Syria at the end of September to support his forces.

Russia has bombed the Islamic State of Iraq and the Levant (ISIL) group and Western-backed rebels, while a US-led coalition has waged an air campaign against ISIL in Syria and Iraq.

But in the wake of the deadly Paris attacks claimed by ISIL, the international focus has shifted away from the beleaguered Syrian president and veered towards defeating ISIL.

On Sunday, French Foreign Minister Laurent Fabius said the departure of Assad was no longer necessary before any political transition in the war-torn country.

France has been joined by Germany and the UK in the Syria military mission.

“The fight against Daesh [ISIL] is crucial, but it will only be totally effective if all the Syrian and regional forces are united,” Fabius told the French regional newspaper Le Progres.

“A united Syria implies a political transition. That does not mean that Bashar al-Assad must leave even before the transition, but there must be assurances for the future.”

US Secretary of State John Kerry said on Friday it might be possible for the Syrian government and rebel forces to cooperate against ISIL fighters without the Syrian president having first left power.

Kerry said on Saturday the next round of negotiations aimed at ending the Syrian civil war will be held in New York later this month.

He said Saudi officials are meeting with members of the Syrian opposition to order to prepare for the talks. 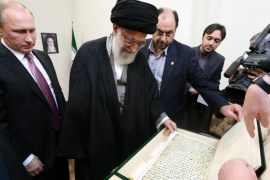 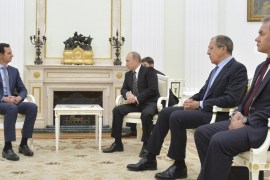 President Assad visits Russian President Putin, believed to be his first trip abroad since the start of the war in 2011.