Iraq’s foreign ministry has summoned the Turkish ambassador to Baghdad to protest against the deployment of Turkish forces near the northern Iraqi city of Mosul and demand their immediate withdrawal.

The ministry said in a statement on Saturday that the Turkish forces had entered Iraqi territory without the knowledge of the central government in Baghdad, and that Iraq considered such presence “a hostile act”.

Iraq’s Prime Minister Haider al-Abbadi had said earlier that no permission had been given for the stationing of “around one armed battalion” of Turkish soldiers in the northern Nineveh area near Mosul, which is under the control of the Islamic State of Iraq and the Levant (ISIL) group.

Turkey’s Prime Minister Ahmet Davutoglu, though, said the troops were there as part of an ongoing training mission at the request of Mosul’s governor and in coordination with Iraq’s defence ministry.

“No one should arrive at wrong conclusions from our support. Turkey is not after any country’s soil,” Davutoglu said.

Earlier, a Turkish security source told the Reuters news agency that Turkish troops had already been in Iraq’s northern Kurdish region, which is semi-autonomous, and had moved to Mosul accompanied by armoured vehicles, in a move which coalition countries targeting ISIL were aware of.

Al Jazeera’s Imran Khan, reporting from the Kurdish region capital Erbil, also said it appeared the Turkish troops were in Iraq at the invitation of the governor of Mosul, Atheel Nujaifi.

“It seems like the government of Mosul has told Baghdad: ‘We need more help with fighting ISIL, and if the Turks are willing to offer that help, we will take them up on that’,” Khan said.

Iraq’s foreign ministry had earlier said in a statement on state television that the Turkish deployment was “an incursion”.

Video released on the website of Turkey’s pro-government Yeni Safak newspaper showed flatbed trucks carrying armoured vehicles along a road at night, describing them as a convoy accompanying the Turkish soldiers to Bashiqa, north of Mosul.

A senior Kurdish military officer based on the Bashiqa front-line told Reuters that additional Turkish trainers had arrived at a camp in the area overnight on Thursday escorted by a Turkish protection force.

“Our soldiers are already in Iraq. A battalion of soldiers has gone there. Training was already being given in that region for the last two to three years. This is a part of that training,” a Turkish official told Reuters.

In Washington, two US defence officials said on Friday that the United States was aware of Turkey’s deployment, but the move was not part of the US-led coalition’s activities.

Turkey has close relations with the Kurdish regional government. 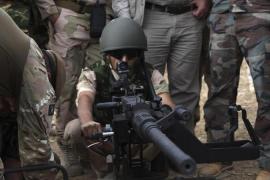