Sunni Muslims are facing forced evictions, abductions, and other serious human rights abuses in areas of Iraq freed from Islamic State of Iraq and the Levant (ISIL) control, the United Nations said on Friday.

Analysts have warned that Sunni Arabs are being discriminated against in Iraq by either the Shia-led government in Baghdad or Kurdish forces in the north, helping to radicalise communities and setting back efforts to defeat ISIL.

Iraqi and Kurdish troops “have been responsible for looting and destruction of property belonging to the Sunni Arab communities, forced evictions, abductions, illegal detention and, in some cases, extra-judicial killings”, according to Cecile Pouilly, a spokeswoman for the UN High Commissioner for Human Rights.

“We have received reports as well about their limited access to basic services and essential goods, such as water, food, shelter and medical care,” Pouilly said.

Some Sunni Arabs in Syria and Iraq have been accused by Kurdish forces of collaborating with ISIL.

The UN noted that it was especially concerned for some 1,300 Sunnis stuck in a no man’s land in the Sinjar region, between Kurdish areas and ISIL-held territory.

In Sinjar, an area recently freed from ISIL control by Kurdish forces, the UN said 16 mass graves were recently discovered.

Inside ISIL territory there were ongoing “gross human rights violations”, including reports of kidnappings, burnings and beheadings of civilians, Pouilly said.

ISIL holds vast swaths of territory in both Syria and Iraq despite continuing efforts by the United States-led coalition targeting the group with air strikes and mostly-Kurdish and Iraqi forces battling on the ground. 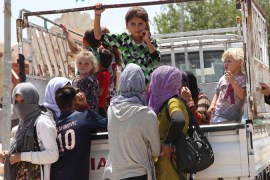 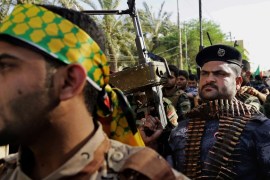