At least 25 Iraqi soldiers and militia fighters have been killed by the Islamic State of Iraq and the Levant in two suicide attacks near Iraq’s northern city of Ramadi, military sources told Al Jazeera.

The attacks came days after Iraq’s Prime Minister Haider al-Abadi said that his country did not need foreign troops on the ground to defeat ISIL.

“There is no need for foreign ground combat forces in Iraqi territory,” Abadi said, adding Iraq’s army was able to kill ISIL leaders and push the group from occupied territories. 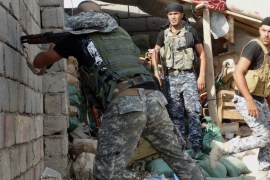 Iraqi operation, backed by US air strikes, led to the recapture of several areas from ISIL in Anbar province.