Nigeria’s President Muhammadu Buhari has said that he is ready to negotiate with Boko Haram for the release of more than 200 girls kidnapped in April last year.

In a televised press conference on Wednesday, Buhari said that if the armed group could identify a credible leadership then the Nigerian government was “prepared to negotiate with them without any preconditions”.

Boko Haram snatched the girls from dormitories in the northeastern town of Chibok in April 2014, sparking international condemnation of former president Goodluck Jonathan’s government and military for failing to rescue them.

Buhari, who was sworn in as president in May, said that there is “no firm intelligence on where those girls are physically located and what condition they are in”.

He added: “I assure you that the cause of the Chibok girls is on our minds.”

Nigerian troops have clawed territory back from Boko Haram in recent months, and last week Buhari announced that the military had “technically won the war” against the armed group.

Hundreds of captives have been freed in recent months, but no Chibok girls were among them.

Some Chibok leaders suggested last week that the abducted girls had been “forgotten” by Buhari, who had said in the past that the war would not be won until the Chibok girls were rescued.

In an apparent response to the announcement of their defeat, suspected Boko Haram fighters attacked the biggest city in the northeast, Maiduguri, with rocket-propelled grenades and multiple suicide bombings that killed about 50 people on Sunday night and early Monday morning.

Al Jazeera’s Ahmed Idris, reporting from the capital Abuja, said: “The Nigerian army has been able to defeat Boko Haram in many areas, displacing them, but some of these areas are still not secure enough for the return of refugees.”

He added: “What the authorities are now doing is trying to move people, vulnerable communities … who could be easy targets for Boko Haram, to much larger or more populated towns to ensure their safety.”

The group’s six-year quest to create an independent Islamic state in northern Nigeria has killed and wounded thousands, and included the mass kidnapping of hundreds of young women. 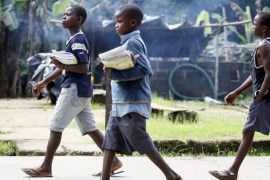 One million forced from school by Boko Haram war 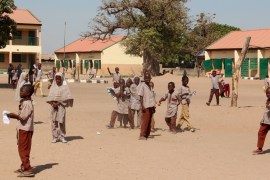