Investigators in Dubai are trying to work out what caused a massive fire at a downtown skyscraper just hours before New Year’s celebrations.

The huge blaze started around 17:30 GMT on Thursday and quickly shot up the 63-storey Address Hotel in the heart of the Gulf metropolis, covering nearly the entire structure and sending hundreds of people fleeing for safety.

A number of explosions were heard in and around the building, which is located near the Burj Khalifa, the world’s tallest skyscraper at 828 metres and epicentre of a spectacular annual New Year’s Eve fireworks show.

“The left side of the hotel is completely gone,” Al Jazeera’s Diana al-Rifai reported from the scene.

“There was a minor stampede – panic set in and people ran away.”

By 21:00 GMT, authorities said the fire had largely been brought under control, injuring at least 16 people.

On Friday morning, firefighters appeared to have mostly extinguished the blaze, even though plumes of white smoke still emanated from the hotel.

Al Jazeera’s Mohammed Jamjoom, also reporting from Dubai, said that as of Friday morning, all roads leading to the hotel were still blocked by authorities.

He said investigators are continuing to gather evidence as to what caused the fire, and it could take longer than usual to investigate, because of the New Year break.

“Certainly this is the last thing that anybody who was at the Address Hotel last night would have expected,” he said, adding that the building is one of the most secured in the area.

The “very luxurious” building is usually packed with local and foreign revelers this time of the year wanting to see the New Year’s Eve firework display at the nearby Burj.

Earlier on Thursday, the government of Dubai’s media office said on Twitter that 14 people had been injured, including a person who suffered a heart attack while trying to run away.
One news report said that one person had died, but there was no official confirmation.

The blaze started on the 20th floor of the building and only affected the outside of the structure, Dubai’s media office said.

Rifai said big pieces of the building fell from the sky and thick black smoke blanketed the entire city. Helicopters hovered around the blaze, she said.

Dennis Mallari, a Dubai-based photographer, was at the 48th floor of the hotel, when the fire broke out. He was trapped for about two hours before rescuers could get him.

“It happened so fast. I quickly grabbed my camera, but the next thing I knew, thick black smoke had already blocked my path to the exit. I thought it was the end,” Mallari, who was there to cover the 2016 New Year countdown, told Al Jazeera.

To escape from the “suffocating” smoke, Mallari had to tie himself to a cable, using his belt and camera strap, and partly hang from the balcony.

Oshaeni Idahosa, a resident at The Address, said:  “When we looked out it was fire on the balcony. We started running out.

“I’m still in shock. The sprinklers didn’t come out, there were no sprinklers. There’s no fire alarm.”

Despite the massive fire, the New Year’s Eve fireworks show nearby at the world’s tallest building went ahead as planned. 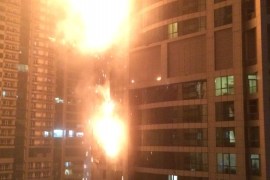 No casualties caused by blaze at the Torch in Marina district, which was brought under control after several hours. 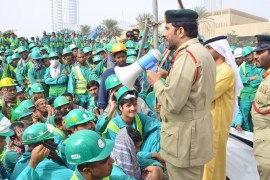 Authorities say police negotiators resolved dispute between hundreds of protesters and their employer within one hour.