A lawsuit has been filed in a US court seeking to stop non-profit groups from sending billions of dollars worth of tax-exempt donations to support illegal Israeli settlements and the Israeli army.

A group of American citizens filed the suit on December 21 against the US Department of Treasury, claiming about 150 non-profits have sent an estimated $280bn to Israel over the past two decades.

The lawsuit claims the donations were “pass-throughs” and “funnels” to support the Israeli army and the illegal settlements in the occupied Palestinian territories.

In the US Internal Revenue Code, these organisations are identified as “501(c)(3)”, and donors are given tax-exempt status and allowed to claim a tax deduction on their gift.

Sheldon Adelson, an American casino magnate, and several other wealthy pro-Israeli businessmen were named in the lawsuit as donors but not as defendants.

The Treasury Department declined to comment on the suit, stating in an email to Al Jazeera: “We don’t comment on pending litigation.”

Susan Abulhawa, a Palestinian-American writer and human rights activist who  put her name on the 73-page lawsuit, said it is about seeking justice for the Palestinian people.

“I want those organisations that aided Israel to be forced to pay restitutions for victims impacted by their actions,” Abulhawa said.

The lawsuit claims non-profit groups directly contributed to violations of US law and international law, subverted US foreign policy, and contributed to countless crimes and human rights abuses targeting Palestinians.

“For 30 years at least, the US taxpayer has been funding and/or subsidising criminal activities overseas, ie murder, arson, malicious property destruction, assault and battery and ethnic cleansing and international terrorist acts,” it said.

The attorney for the plaintiffs, Martin F McMahon, said the US Department of Treasury should not just end the tax exemption, but should also recoup hundreds of millions of dollars in back taxes.

The lawsuit said: “These charities’ agenda is to rid the West Bank and EJ [East Jerusalem] of all non-Jews, consistent with perceived biblical imperatives. They have been very successful in that endeavour, as detailed herein, primarily because of the Treasury’s abject and long-standing failure to monitor and prevent their criminal activities for at least the last 30 years.”

McMahon said his law firm was working pro bono and is looking for other plaintiffs to join the lawsuit.

The Treasury Department has 60 days to respond to the lawsuit.

“This [Obama] administration, like every administration before it since 1967, views settlement activity as illegitimate and counterproductive to the cause of peace,” the US State Department told Al Jazeera in an email.

“The United States has never defended or supported settlements and activity associated with them and, by extension, does not pursue policies that would legitimise them.” 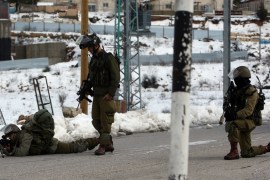