Refugees in a German town have been banned from setting off fireworks to mark the New Year, apparently out of concern that loud blasts could traumatise people who have fled war zones.

The town of Arnsberg in North Rhine-Westphalia has issued directives in several languages banning the sale of rockets and firecrackers to residents of refugee shelters, a spokesman told the Neue Westfaelische daily.

The Arnsberg fire brigade also recommended that townspeople consider not launching any fireworks “to avoid reawakening memories in people who have fled war and conflict of the horrors that threatened them”.

Setting off fireworks at midnight to welcome the start of the new year on January 1 is traditional and a spectacular show at Berlin’s Brandenburg Gate is broadcast live on television.

However, “people who come from a war zone connect loud bangs more with shots and bombs than with New Year’s Eve fireworks”, the spokesman was quoted as saying.

No one was immediately available in Arnsberg to comment to the Reuters news agency, which carried the story.

Posters in refugee homes have been put up explaining the ban, imposed partly for fear of fires breaking out in buildings used to house refugees.

Gymnasiums, unused hotels and empty buildings such as Berlin’s defunct Tempelhof airport have been turned into shelters for some of the million people who have sought asylum in Germany this year, many fleeing conflict in the Middle East and Africa.

Temporary buildings have also been erected. 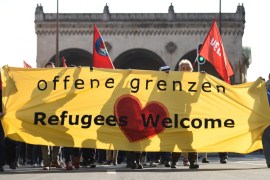 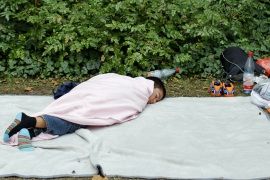