New Delhi, India – Rohit Kumar has joined hundreds of fellow students for months protesting in front of the government office in charge of higher education after it suddenly announced it would discontinue vital scholarships.

The fellowship was started by the previous government in 2007 and applied to 50 institutions benefiting nearly 35,000 students.

“Students have been struggling to live on the current the scholarship amount particularly in the capital, New Delhi,” Kumar, who is pursuing a post-graduate degree in sociology, told Al Jazeera.

Monthly payments of $75 for post-graduate and $120 for PhD students greatly helped with costly living expenses.

Despite the announced cuts, students are demanding an expansion of its scope as a majority of the 112,812, PhD students are out of the purview of the scholarship.

A student at the Delhi School of Economics, Kumar said he fears the sudden government cancellation of the scholarship in early October will make it difficult – if not impossible – for students to pursue higher education.

It is 70th day since the students began their sit-in called OccupyUGC in front of the University Grant Commission (UGC) building – a government body that oversees and funds universities in India.

Slogans such as “Education had value now it has a price too”, “WTO go back” and “Stop privatisation of education” adorn the walls of the UGC building in New Delhi.

Avinash Pandey, an MA student at Delhi University, said “in a country like India with high social and economic inequality, this [fund cut] will affect those on the margins”.

On December 7, when hundreds of students tried to march towards India’s parliament they were dispersed by police who were accused of using accessive force.

India’s average expenditure on education as a percentage of its GDP has remained at about three percent in recent years, while a government-instituted committee – the Kothari commission – had recommended at least six percent as far back as 1965.

At 74 percent, India’s literacy level is low as compared to other fast developing countries such as Brazil (92 percent) and China (96 percent).

Meanwhile, critics point out, funding for defence spending was hiked by nearly eight percent in the 2015 budget.

Anubhuti Agnes Bara, a PhD student from Jawaharlal Nehru University, said instead of expanding the scope of the much-needed scholarship, the government just scrapped it.

“The scholarship acts as an incentive to many students coming from educationally and economic backward backgrounds,” said Bara, who is researching government policy-making and tribal people’s resistance.

Mohammad Miyan, member of the government’s University Grant Commission, said “the ministry has constituted a committee to look into the possibilities of reviving the continuation of non-net scholarship”.

“I think somewhere the [education] minister [Smriti Irani] has made a commitment that we are looking into it, it won’t be abolished as such,” he said.

“They have been cutting funds from other areas as well such as colleges in Delhi University, which has about 80 colleges. There have been attempts to withdraw funding from higher education institutions,” Nandita Narain, head of Delhi University Teachers Association, told Al Jazeera.

“Our understanding is that there is a quantum jump in particular policy of pursing towards private education since 2005, when India made an offer to World Trade Organisation [WTO] to put higher education into the category of commercial tradable services,” she said.

After facing protests from students and teachers the ministry of human resources development, which runs country’s education policy, formed a committee that will decide the fate of scholarships.

Narain, who teaches mathematics at Delhi-based St Stephens college, called the government’s education budget cuts the “second phase of colonisation through organisations like WTO, which actually is trying to run government from outside”.

“We need to come together against it. I do believe that education … is under attack.”

Sanjay Kumar contributed to this report from New Delhi 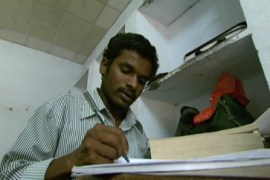 Growing movement pushes for Telangana to break from Andhra Pradesh. 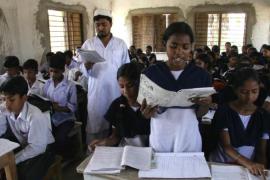 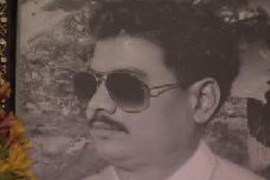