Parts of northern England are suffering their worst floods in more than 70 years with weeks of heavy rain leaving vast areas under water on both sides of the Pennines mountains.

British Prime Minister David Cameron has sent in 500 soldiers to help the exhausted residents and emergency workers. A further 1,000 troops remain on standby.

Cameron described the flooding as “unprecedented” as the damage spread to the major cities of York, Leeds and Manchester.

This was supported by Environment Secretary Liz Truss who confirmed: “In Lancashire every single river was at a record-high and in Yorkshire we have seen some rivers a metre higher than they have ever been before.”

Some areas have had up to a month’s worth of rain in recent days, falling on already saturated ground.

There are currently 116 flood warnings in force, 27 of which are severe, meaning that there is the threat of some danger to life.

River levels continue to rise and there is more rain expected over the coming days. The historic city of York has been particularly badly hit.

The River Ouse finally peaked in the early hours of Monday morning at 5.2m. This easily exceeds the normal summer levels, and is only just shy of the highest recorded level of 5.4m.

The next spell of rain is expected on Monday night into Tuesday, but should clear eastern England by Tuesday afternoon. This will be followed by yet more rain spreading in from the west on Wednesday.

The UK Met Office have already issued an early warning that the rain will be heavy at times and accompanied by gales or even severe gales in exposed areas. 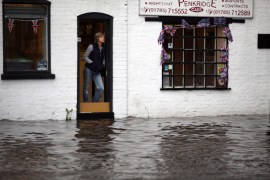 Massive downpours led to flash flooding across parts of central and northern England. 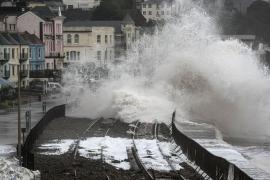 Thousands left without power as storms batter the English coastline.