Shuafat refugee camp, occupied East Jerusalem – More than 1,000 Israeli troops entered Shuafat refugee camp in the occupied West Bank earlier this month to demolish the family home of Ibrahim al-Akkari, who was shot dead by Israeli forces after ramming his car into a group of people in Jerusalem last year, killing a soldier and a civilian and wounding 13 others.

The demolition would have left Akkari’s wife, Amira, and their five children homeless. But within a few hours, a message was being broadcast through local mosques and loudspeakers on cars, asking residents to donate what they could to help the family rebuild their lives.

Within a few days, activists said they had raised more than $70,000, with hundreds of people donating cash, furniture and household items.

“Each family donated what they could,” said Abdullah Alqam, a community leader who took charge of the campaign.

The Akkari family is now living in a newly built apartment block near the ruins of their old home. Their two-bedroom apartment, given to them free of charge by a local businessman, contains a brand new kitchen, furniture and appliances. Residents donated anything they could – down to the tiniest details, such as packs of sugar and spices – after all of the family’s possessions were blown up along with their home.

“The reaction of the people here didn’t surprise me,” said Amira, whose family first received the demolition order nearly a year ago. When it was finally carried out on December 2, more than a dozen Palestinians were subsequently injured in fierce clashes with Israeli forces.

“After my husband died, many people came forward to help. They gave us food and helped me pay for my children’s school fees,” Amira told Al Jazeera.

The policy of demolishing the homes of Palestinian attackers has been widely condemned by rights groups as collective punishment, which is prohibited under international law.

Although the Israeli government purports that the demolitions are meant to deter further attacks, rights groups say the line between deterrence and punishment is a thin one, asserting that the policy deliberately harms innocent people.

In early October, Benjamin Netanyahu, the Israeli prime minister, announced that the government would be taking “additional steps to deter terror and punish terrorists”, which included “fast-tracking the razing of terrorists’ homes”.

Not only do these demolitions contradict the Geneva Conventions, but also every common sense and morality.

Since then, more than 100 people, half of them children, have been displaced, according to the United Nations Office for the Coordination of Humanitarian Affairs. According to Israeli human rights organisation B’Tselem, 14 out of the 26 homes demolished or sealed since October belonged to neighbours of suspected attackers.

The practice, first introduced as an emergency military regulation during the British Mandate, was widely used during the second Intifada, when Israel demolished more than 600 homes, leaving 4,000 people homeless – the majority of whom had not been charged with any crime.

It was discontinued in 2005 after an Israeli military committee concluded that there was no evidence it worked as a deterrent, but it resumed again in 2014, shortly after the kidnapping and killing of three Jewish teenagers.

“Not only do these demolitions contradict the Geneva Conventions, but also every common sense and morality,” said Dalia Kerstein, director of HaMoked, an Israeli NGO that has been petitioning the Supreme Court to stop the demolitions.

B’Tselem said the Supreme Court has failed to fulfil its role of preventing the state from acting unlawfully and has approved “almost every single case brought before it”. Jewish Israeli attackers have never been subject to the policy.

A spokesperson for the Israeli justice ministry did not respond to Al Jazeera’s request for comment.

A day after the demolition in Shuafat, Israeli forces entered Nablus to demolish the home of Ragheb Alawi, suspected of masterminding an October shooting attack that killed an Israeli settler couple, Eitam and Naama Henkin. Alawi is currently in prison, awaiting judgment on his case. Three other homes were demolished in Nablus in October, while three more families have been served with demolition orders.

After the demolition of Alawi’s home, which housed his wife and two-year-old son, activists put a glass collection box in the centre of the city and formed a committee to oversee a fundraising campaign to rebuild the demolished homes. They have raised more than $200,000, activist Hassan Qamhia told Al Jazeera.

“In addition to that, some people donated land; others gave furniture, electronics and building materials,” Qamhia, a 33-year-old university administrator, told Al Jazeera. The fundraising campaign has not received any support from the government, he said. “Every day we count the money in [the presence of affected family members], while trusted community leaders oversee the process.”

While the municipality of Nablus will contribute towards rebuilding and renovating neighbouring homes that are damaged during home demolitions, it will not support the families who received the demolition orders.

“Together with the demolition order comes an order for the military to seize the land, with no time limit,” Kerstein said, noting that the orders target the premises, meaning the family cannot rebuild on the site.

“When we saw that nobody was doing anything to help these families, that government institutions weren’t doing anything, we decided something must be done,” Qamhia said. “We aim to give them keys to new apartments, with everything they need.” 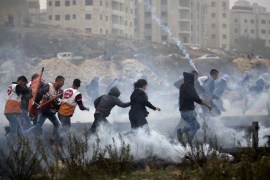 Israel says one man was killed in attempt to ram soldiers, the latest incident after months of escalated violence. 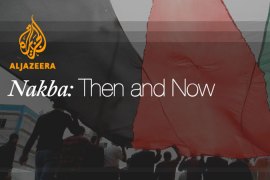