A Myanmar court has jailed a woman for six months for a Facebook post “ridiculing” the country’s army chief and the colour of a new uniform.

“My daughter was sentenced to six months’ imprisonment at Ma U Bin township court this morning under Section 66(d) of the telecoms law. We will appeal as we are not satisfied,” her mother Ei San told the AFP news agency.

“If you love mother that much, why don’t you wrap mother’s longyi on your head?” the post said.

The maximum penalty she faced was three years in jail. Her lawyer confirmed the sentence but said his client denied making the post.

Chaw Sandi Tun was arrested in October. The same month, Patrick Kum Jaa Lee, an NGO worker, was also arrested for a Facebook post that mocked the army.

Myanmar has been ruled by a quasi-civilian government since 2011 following five decades of military rule and has been widely praised for ushering in a series of economic and political reforms.

But in recent months critics have accused the military and government of returning to junta-era tactics, with arrests over social media posts. 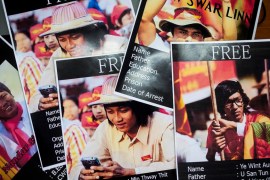 Activists skeptical that reform will come, vow to keep striking until all Myanmar political prisoners released. 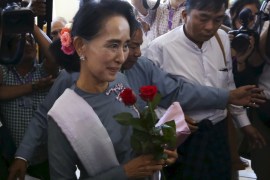