Japan’s Prime Minister Shinzo Abe has heralded a “new era” in Japanese – South Korean relations after the two countries reached a landmark deal on the issue of wartime sex slaves.

“Japan and South Korea will welcome a new era,” Abe told reporters after speaking by phone with South Korean President Park Geun-Hye. “Both countries will cooperate together to open” it, he added.

The deal was reached in South Korea’s capital Seoul at a meeting between the foreign ministers of the two countries.

“The comfort women issue… occurred with the involvement of the Japanese military… and the Japanese government acutely feels its responsibility,” Japanese foreign minister Fumio Kishida said after a meeting with his South Korean counterpart Yun Byung-Se.

Kishida added that Japanese Prime Minister Shinzo Abe expressed an “apology and repentance from the bottom of his heart” to the victims.

Yun Byung-se said the agreement was “final and irreversible,” as long as Japan faithfully followed through with its promises.

The issue has long been a source of friction between Seoul and Tokyo, with South Korea previously accussing Japanese leaders of repeatedly failing to properly atone for wartime atrocities.

Tens of thousands of women from around Asia, many of them Korean, were sent to front-line military brothels to provide sex to Japanese soldiers.

In South Korea, there are 46 such surviving former sex slaves, mostly in their late 80s or early 90s.

Many survivors of the wartime sexual slavery had urged Japan to issue an official apology, make reparations and include wartime atrocities in Japanese school textbooks.

The US sees North Korea as a key rival in the south east Asian region and hopes to benefit from the strengthening of ties between its two allies, South Korea and Japan.

The two Northeast Asian countries together host about 80,000 U.S. troops and are members of now-stalled regional talks aimed at ending North Korea’s nuclear ambitions in return for aid. 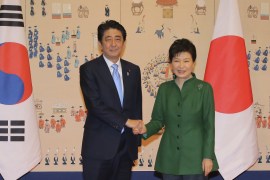 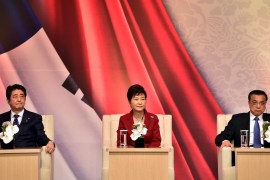 Regional powers also agree to restart trilateral meetings that have not been held since 2012 due to strained relations.