Wounded fighters belonging to armed groups will be allowed to withdraw from the suburbs of Damascus as part of a deal with the Syrian government, according to a UK-based monitoring group.

The Syrian Observatory for Human Rights said on Thursday that buses to transport the fighters from the Damascus suburb of al-Qadam had already started arriving.

Fighters, including those belonging to the Islamic State of Iraq and the Levant (ISIL) group, will be allowed to leave the Yarmouk, al-Hajar al-Aswad and al-Qadam neighbourhoods of the Syrian capital.

They will be followed by family members of the groups’ supporters.

The UN said it was observing the deal but had not taken part in it.

ISIL has a relatively small presence in Damascus but made big gains in the mainly Palestinian Yarmouk refugee camp in April.

The group overwhelmed government-allied Palestinian fighters and neutral factions in an offensive that allowed them control of 90 percent of the area.

Parts of the suburb were previously besieged by the Syrian government, leading to shortages of food for the area’s remanining residents.

Its hold over its territories in Damascus has since withered amid counteroffensives by the government and rebel groups.

Damascus is also cut off from ISIL’s strongholds in the east and north of the country.

ISIL is involved in a multiple-front conflict involving almost every faction in the Syrian war.

It is fighting Syrian rebel factions – including its one-time ally al-Nusra front – besides Kurdish forces in northern Syria and the Syrian government.

ISIL has also engaged in skirmishes with the Lebanese and Turkish armies, and is battling Kurdish Peshmerga forces and Iraqi government forces. 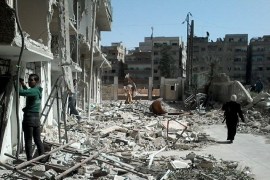 After years-long siege by the Syrian regime and an invasion by ISIL, Palestinians say they have been abandoned. 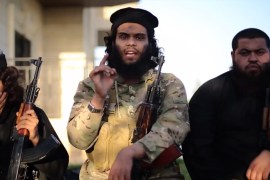 Fighters condemn Palestinian group for crackdown on ISIL supporters, and failure to implement its brand of Islamic law.