Beirut, Lebanon – Until four years ago, Salim, 50, called Aleppo home. When his house was taken over by armed groups for 20 days and later bombed to rubbles, he recalls that an act of Christmas kindness saved his life.

Salim tells the story of a Muslim friend who took his ID that indicated his religion and hid it away with his spouse, believing the rebel group wouldn’t search the woman. The moment Salim and his family were released, in early January 2012, he immediately took his wife and four children and sought refuge in Lebanon.

“My name is not religiously indicative. But my son’s name is Boutros (Peter) and you can’t have a more Christian name than that. It would’ve been only a matter of time. We had to go.”

There are many estimates over how many Syrians are currently seeking refuge in Lebanon, but all of them agree that the number is well over one million.

Out of those Syrians is a sizable minority of Christians who also left their homes, and anything that meant the world to them, and ran to the place we call home, with nothing on them but the clothes on their backs.

Salim recalls arriving to a country feeling desolate. He had nothing on him. He had no means to provide for his family. Even his church did not help the way he had expected them to.

His multiple solicitations to the United Nations and their Refugee programmes went unanswered. He had nowhere to go, in a place where he knew no one.

It was all up to the kindness of a friend of his living in Sweden that he was able to find a small place for his family in Lebanon, and start to get back on his feet.

“It helped that I was Christian, I can’t lie,” he said. “The people around where I live felt more at ease around me when they knew. It made it easier to get a job.”

Christmas festivities in the Middle East start in early December, shortly after commemorating the day of St Barbara, an early Christian martyr whose day is now the Eastern equivalent of Halloween, paralleling a life where she went in disguise to escape persecution.

It is tradition that by the end of St Barbara’s day, houses should have their Christmas trees and nativity scenes ready, decorations are up in full swing and the children start to get giddy with Christmas season fever.

Christmas was always the year’s most joyful times.

My children don't feel Christmas any more…There's no Eid when there's no family.

Salim recalls Christmases in Syria all too well. It is the same story of putting up a Christmas tree in early December, decorating the verandahs with lights that glisten off the rainy cold December days with warmth that he would feel only during that time of the year.

He remembers how happy his children used to be, being taken to buy all the new “eid” clothes, hoping their parents would get them much coveted toys.

So what did his children want for Christmas this year.

Despite the heavy Christian presence in Lebanon, Salim’s Lebanese Christmases have not been similar to the ones he had in Syria, even though both countries celebrate the festivities in parallel manners.

Salim hasn’t been able to afford a Christmas tree and its decorations. He can’t afford “eid” clothes for his children or the gifts that they now want – the tablets and smartphones, like other children their age.

He says they now divert their money to what they actually need: Shelter, food, and education to make up for the year his children lost coming here.

“There’s no eid, to be honest,” he says. “We’ve forgotten about what it is to live the Christmas spirit. We now go to the mid-night mass and hope that the church is distributing some presents to those attending so my children can get something.”

Christmas is also not the same without family. Salim’s extended family is now split all over Syria and Lebanon, with no possibility to gather for the holiday.

“I lost a brother in the war recently,” he says with a firm voice, only betrayed by the tear he held back. “Perhaps it’s a good thing we can’t gather so we don’t feel him missing.”

But his brother wouldn’t be the only person missing at Salim’s Christmas dinner table.

“Over the past few months, I worked tirelessly to get my son out of here. I managed to get him to Greece legally of course, and from there he was flown to Holland. It’s difficult there. The language is a big hurdle. But he’s happy. He’s safe,” says Salim with a confident tone.

“He feels the woes of the world subsiding with each passing day he works at that supermarket, and I feel the woes of my days subside every time he says so. Isn’t that a little bit of Christmas happiness?” He smiles.

It was the only time he smiled.

He then gazed at the ground and said exasperatedly, “I’m grateful to be alive. I’m grateful my family is whole, that my children and wife are safe. There’s no greater gift I could ask for. But if I could be greedy and ask for anything, I’d ask for home.” 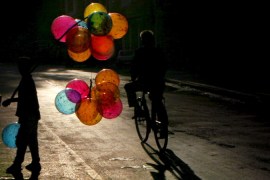 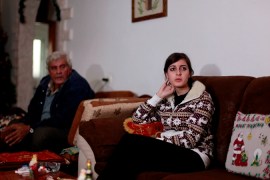 A muted Christmas in Gaza

Holiday cheer is tough to come by after this summer’s brutal war, which has left Gazans struggling to recover. 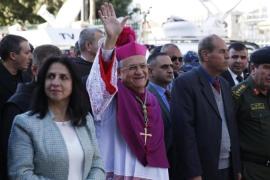 A Christmas in Bethlehem is a dream come true for thousands of Christians. 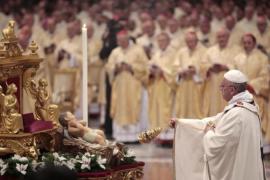