A tornado swept across at least three Southern states on Wednesday, in what seems to be an unprecedented event.

The twister appears to have stayed on the ground for over 160km, starting in northern Mississippi, crossing Tennessee and ending up in Kentucky.

This is by no means the longest track nor most damaging tornado, but in late December it is very surprising.

Until recently, any tornadoes at this time of the year were rare.

This year, ready access to warm, moist air from the Gulf of Mexico means that severe weather is a risk over the US south even during the cold season.

The longest continuous track for one tornado is an almost unbelievable 378km, by a tornado that travelled through Missouri, Ilinois and Indiana.

This, however, occurred in the spring, on March 18, 1925. December tornadoes normally boast no such length, and this is what makes Wednesday’s tornado so extraordinary.

The storm system responsible for this tornado, also produced a tornado in the Indianapolis suburb of Greenwood, pushing the typical northern edge of such low season outbreaks.

Until the start of this century, December tornadoes were almost unheard of 1957 and 1953 did have deadly tornado outbreaks in December, with the 1953 funnel over Vicksburg, Missouri, being the deadliest December tornado on record, killing 38.

Since the year 2000, there have been rather more December tornadoes than you might expect.

The most recent significant tornado outbreak during Christmas week was on December 21, 2013, centred over the Mississippi Delta.

The largest outbreak on Christmas Day occurred on December 25, 2012, from Texas to North Carolina.

On New Year’s Eve 2010, an outbreak with 32 tornadoes killed four people in Arkansas.

Spring and autumn are usually the seasons of maximum tornado activity, because this is when the largest temperature contrast exists across the continent.

Unfortunately, for residents of the US Southern states, this is an El Nino year, so the storm potential in the eastern Pacific is greater.

Recent flooding in Oregon and major snowfall throughout the Rockies and Desert states shows the recent increase in activity.

Coupled with this, the Gulf of Mexico is warmer than usual, giving rise to much more evaporation and creating a constant feed of humid soup over the Southern states.

When a front of cold air sweeps off the Rockies and onto the Plains, the air is lifted and huge thunderstorms build.

In spring and autumn, the temperature difference between Gulf warmth and Rockies cold is so great that tornadoes spin up with ease.

In December, the temperatures are normally not so different.

This year, however, due to a comination of ocean warming and El Nino, there is still a significant contrast and the result is tornadic outbreaks more reminiscent of spring. 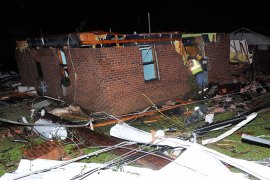 The ‘Magnolia State’ has been hit by a series of deadly twisters as severe weather hits the southeastern US.