Tourism to Bethlehem is down this Christmas, the mayor of the city revered by Christians as the birthplace of Jesus said, as violence continued to grip Israel and the occupied Palestinian territories.

Bethlehem’s hotel owners are struggling to fill beds, with 11 new hotels opening in the past three years.

Every year, when we light the tree, usually there is a huge display of fireworks, but this year we will ring church bells instead.

Mayor Vera Baboun said that hotel occupancy in the city did not break the 40 percent mark this year. Last year, she said, hotels were fully booked, catering to 78,783 tourists

“Bethlehem is empty this year,” Baboun told reporters on Tuesday.

Andrea Bocelli, the Italian tenor who was scheduled to perform in December, has called off his concert and sellers of olive wood souvenirs say they have nearly no customers, the AP news agency reported.

Christmas Eve is usually a major event for the town, drawing thousands of foreign tourists and giving a huge boost to local businesses. But this year, the holiday spirit will be harder to find.

Baboun said city authorities would only decorate Manger Square, home to the church that hosts the traditional birthplace of Jesus, and two nearby streets, instead of the entire downtown area.

“Every year, when we light the tree, usually there is a huge display of fireworks, but this year we will ring church bells instead,” Baboun said.

The bells, she added, would remind everyone “that we exist despite all the catastrophes”.

The latest wave of violence, which erupted in mid-September, has killed at least 106 Palestinians and 19 Israelis.

Adding to the difficult environment for tourism, was a call by a Jewish far-right leader to ban Christmas celebrations in Israel.

“Christmas has no place in the Holy Land,” wrote Gopstein, who lives in a Jewish settlement in Hebron in the occupied West Bank.

The Coalition Against Racism in Israel and other activist groups called on authorities to investigate him. 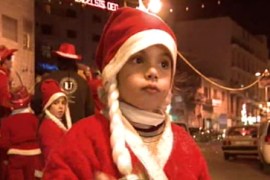 Palestinian Christians living in Bethlehem could be spending their last Christmas in their hometown.