A senior politician says Iraqi forces are likely to retake Ramadi from Islamic of Iraq and the Levant (ISIL) fighters within “three or four days”, as fierce fighting for the key city continued.

Jaber al-Jaberi, an MP from Anbar province, told Al Jazeera that while the progress of Iraqi forces has been slow, it has been “well organised” between the counterterrorism forces, comprising Iraqi army soldiers, tribal fighters and local police.

“There is a big fight now in the downtown of Ramadi,” Jaberi said on Wednesday afternoon, after Iraqi intelligence estimated that only 300 ISIL fighters were left in the city.

“[Iraqi forces] are fighting in this moment to retake the government building in the centre of Ramadi … We hope in three or four days, maybe, Ramadi will be liberated from [ISIL].”

Military sources told Al Jazeera that Iraqi counterterrorism forces were on Wednesday preparing to storm the Hauz section of Ramadi – the southern entrance to the centre of the city.

The Hauz section is considered strategically important because it is adjacent to the local government buildings, include the provincial council building and the Anbar provincial police headquarters.

Ramadi, about 120km from the capital Baghdad, was captured by ISIL in May, but Iraqi forces have since managed to claw back some territory.

A counterattack by government forces on the centre of the Ramadi  began in earnest on Tuesday.

Ramadi’s fall was the government’s biggest setback since ISIL fighters swept through areas in the country’s north and west – including Iraq’s second-biggest city of Mosul – in the summer of 2014.

As fighting continued close to the centre of the city, ISIL fighters took their fight to government forces stationed outside Ramadi on Wednesday morning.

Military sources told Al Jazeera that an ISIL suicide bomber killed at least seven soldiers and injured at least 14 others in an attack on forces stationed at Hussaibah village – east of the city.

Jaberi, the Anbar MP, said it was important for the central government to continue its support for local fighters and officials in Anbar after the capital was recaptured.

“I think after the military battles end, we will face a humanitarian crisis,” he said, adding that he expected “a sleeping cell” of ISIL fighters to remain in the city, waiting for signs of weakness or frustration. 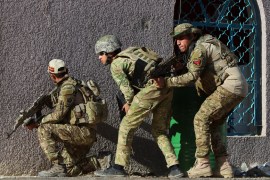 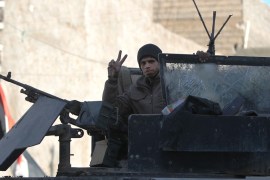 Iraqi forces claim to make inroads in the city as the US asks allies to step up effort to contain ISIL. 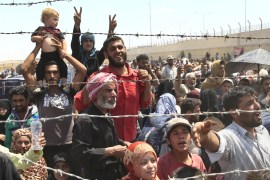 Kobane, Ramadi and the other cities we forgot