A Catholic church in the Indian city of Bangalore says it has built one of the biggest Santa Claus statues in the world – more than 27 metres tall and weighing about three tonnes.

Sundar Raj, from the youth wing of St Joseph’s Church, said on Wednesday the giant Santa Claus – made out of steel mesh, stucco, and red-and-white wool – was built to attract sightseers and raise money for the city’s poorest children.

Vincent Sumdarraj, another member of the church’s youth group, told Al Jazeera about 35 workers were involved in its construction that began on November 1 and cost about $40,000.

He said he expects 20,000-30,000 people to visit the structure on Thursday after his group launched a marketing campaign.

“We also want to educate the people of India, especially non-Catholics, on why Santa Clause is important,” Sumdarraj said.

“Many have the misunderstanding that he is some funny old guy who just comes to give presents… But Santa Claus is all about helping poor children.”

Between 2-3 percent of India’s 1.3 billion people are Christians. 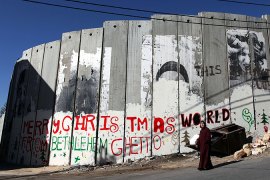 Scaling a wall: Santa in Palestine

Christmas is a period awash with metaphor and symbolism: a call to embrace the humanity that exists within all cultures. 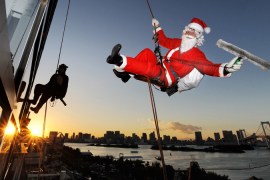 Santa from Japan to the Holy Land

Across the Asian continent, Christians and others don Santa Claus costumes in celebration of Christmas.