Rescuers have pulled a 19-year-old man from under the rubble caused by a landslide in China more than 60 hours after a disaster that has left scores of people missing.

The dramatic development at a dump in Shenzhen came on Wednesday as police raided the offices of the company in charge of the site and arrested the deputy general manager.

Al Jazeera’s Adrian Brown, reporting from Beijing, said the rescue of Tian Zeming had raised the morale of the thousands-strong team of rescuers.

According to the official Xinhua news agency, Tian was in a stable condition and doctors were trying to save one of his feet, which had been stuck in the debris.

Tian told rescuers another survivor may have been close to where he had been trapped, but officials later said that person was found dead.

Sunday’s landslide came after heavy rain in the area, with mud and waste careening into multi-storey buildings at the Hengtaiyu industrial park in the city’s northwestern Guangming New District, toppling them in collisions that sent rivers of earth skyward.

More than 70 people were still missing on Wednesday, with only a handful of bodies found so far.

“Big questions are being asked here about how this was allowed to happen,” Al Jazeera’s Brown said.

“We are seeing a familiar theme here: lax government regulations. We know that the pile of waste had grown to be about 100m high … and that, according to one local report, the government had warned about an accident like this happening.”

The mudslide was the latest in a series of high-profile industrial accidents in China and came just months after almost 200 people died in a massive chemical blast in the port city of Tianjin. 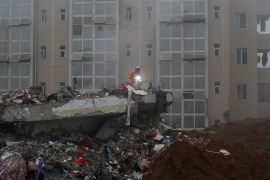 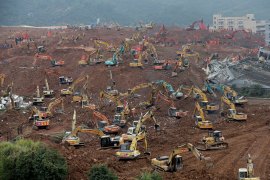 Searching for the missing in China’s deadly landslide

More than 70 people remain unaccounted for days after massive mudslide slammed into an industrial park.