Australia’s government has reversed a widely criticised decision to reject visa applications for relatives of a dying Pakistani student, who want to visit him on his deathbed.

Hassan Asif, a 25-year-old Pakistani who was diagnosed with skin cancer while studying in Australia, will now get to see his mother and brother after their second request for visas was approved on Wednesday.

The Australian immigration department rejected the pair’s initial application, saying that while the compassionate nature of the proposed visit was considered, there was a risk that they might overstay their visas.

After the opposition Labor Party and community groups criticised the decision, however, the office of Peter Dutton, the immigration minister, said that new applications for visas had been approved.

“At first we could not understand why our visas were refused. I am not going to live there, I want to return back to Pakistan. I live and work here and love this country. We just want to meet Hassan in this critical time.”

Hassan moved to Australia two years ago to study architecture at Victoria University in Melbourne, but dropped out after he was diagnosed with skin cancer in March this year.

According to his care providers at the Melbourne City Mission, Hassan’s final wish is to see his family, as he has only weeks to live and is unable to travel back to Pakistan because of his deteriorating condition.

“It was a very emotional moment for us when we heard about the news,”  Sherri Bruinhout, the mission’s director of homelessness and justice, told Al Jazeera.

“He does not have long. Hassan needs to be around his family during this time, which is why we are working on getting his family here as soon as possible.”

On Wednesday Dutton defended his department’s original decision to reject the visas, but said additional information had been requested from the family – allowing the visas to be issued.

“I’m hopeful that they can arrive in Australia soon, spend some time with their terminally ill son and brother and I think that’s what most Australians would expect,” Dutton said in an interview with Sky News.

“I think taxpayers would say: ‘Look fair enough, we want to provide a compassionate arrangement for a mother and a brother to visit, but if there is a definite risk that that person is going to overstay or not return or not comply with their conditions around their visa, then extra scrutiny should be applied.'”

Earlier on Wednesday, the opposition condemned the initial visa rejection and called the minister to “immediately intervene and sort out this bureaucratic bungle”.

Melbourne’s Pakistani community also campaigned for Hassan, raising funds to support him and his family.

“There were many efforts made to fulfil his financial, medical, living, pharmacy, transport, accommodation and food needs at community level,” said Mian Manzoor, from the United Muslim Migrants Association in Australia.

“The response we received was overwhelming.” 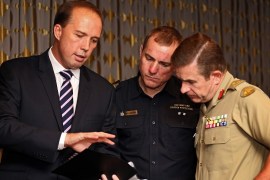 Australia says it turned back over 600 migrants at sea 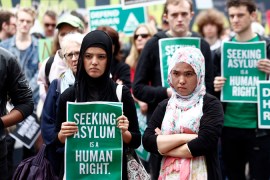