The first US national study to map wild bees has found that the insect, which is essential for the production of about one-third of the world’s crops, is facing major declines in the country’s most important agricultural regions.

The severe bee die-offs could destabilise the country’s crop production and increase costs for many farmers, according to the study published in the Proceedings of the National Academy of Sciences on Monday.

The researchers estimated that between 2008 and 2013 wild bee numbers diminished by almost a quarter in the entire country, in a trend driven largely by conversion of their natural habitat into farmland, including corn for biofuel production.

The research team cited 139 counties as especially troubled spots, including those in the regions of California’s Central Valley, the Midwest’s Corn belt and the Mississippi River valley.

The counties grew crops that are highly dependent on pollinators, such as almonds, pumpkins, squashes, blueberries, watermelons, peaches and apples

Pesticides and diseases were cited as other major factors behind the declines among the roughly 4,000 US species of wild bees.

Contribution to US economy

“Wild bees help pollinate many of our most nutritious crops, support natural ecosystems and contribute over $3bn to the US economy each year,” said Taylor Ricketts, director of the University of Vermont’s Gund Institute for Ecological Economics.

Their decline may prompt greater dependence on commercial honeybee colonies for pollinating crops.

Yet, honeybee numbers are also facing declines, according to Gund Institute researcher Insu Koh, the lead author of the study.

Michigan State University entomologist Rufus Isaacs, who heads the US Department of Agriculture-funded Integrated Crop Pollination Project, said: “Our results highlight the need for strategies to maintain pollinator populations in farmland, and the importance of conservation programs that provide flowering habitat that can support wild bees and other pollinators.”

The study followed a 2014 memorandum by US President Barack Obama creating a task force to study pollinator losses.

The task force in May called for preserving wide swathes of pollinator habitats. 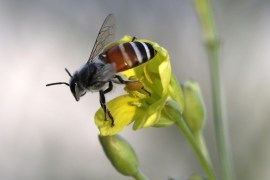 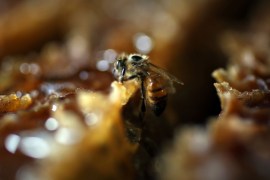 Man who helps look after White House apiary discusses “crisis” of bee-colony losses in the context of US initiative. 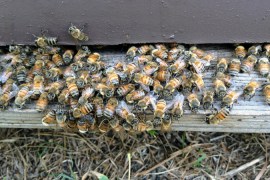 We explore high-tech methods to artificially inseminate honey bees, which are dying in record numbers.