A court in Beijing has convicted one of China’s most famous human rights lawyers over comments he made online, giving him a suspended jail sentence, according to state broadcaster CCTV.

Pu Zhiqiang was sentenced by Beijing’s No 2 Intermediate People’s Court on Tuesday for “inciting ethnic hatred” and “picking quarrels and provoking trouble”.

The ruling was a three-year prison sentence that was deferred for three years, but observers said the way it was constructed means it is unlikely he will be jailed.

Pu accepted the ruling and will not appeal, CCTV said.

The prominent lawyer, who has represented labour camp victims and the dissident artist Ai Weiwei, was detained a year and a half ago in a nationwide crackdown on critics.

His conviction was primarily based on seven social media posts, in total approximately 600 characters, in which Pu criticised government officials and polices between 2011 and 2014.

Amnesty International criticised the guilty verdict as a “gross injustice”, but welcomed the deferred sentence.

“Clearly it is positive that Pu Zhiqiang is unlikely to spend another night in jail, yet that cannot hide the gross injustice against him,” William Nee, China researcher at Amnesty International, said.

“He is no criminal and this guilty verdict effectively shackles one of China’s bravest champions of human rights from practicing law,” he added.

At least one woman outside the court where the verdict was read was taken away by police in tears as she screamed that Pu was innocent.

Security personnel – some in civilian dress and uniformed officers – also pushed and shouted at activists and journalists outside the court. 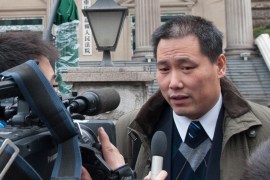 Scuffles as celebrated lawyer goes on trial in China 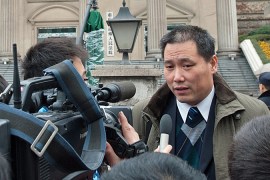 Pu Zhiqiang detained with authorities wary of any dissent ahead of June’s 25th anniversary of Tiananmen Square protests.