The Turkish military and Kurdish separatists were engaged in fierce clashes on Monday as troops tried to root out fighters from two southern towns.

Two Turkish soldiers were killed and six wounded in a Kurdistan Workers Party (PKK) roadside bombing as their vehicle travelled on a road near the eastern town of Bitlis, state media reported.

Fighting in Cizre and Silopi started last week when the Turkish army launched one of its biggest domestic military operations in recent years against the PKK.

Both towns and several other areas in the mainly Kurdish south are subject to a curfew restricting civilians’ movements.

Al Jazeera spoke to a resident of Cizre who said civilians had been caught in the crossfire between security forces and Kurdish fighters.

“Every day, every minute, there is bombing and shooting … We can see and hear all of it,” said the man who spoke by phone and did not want his name published for fear of arrest.

An army helicopter was unable to land in Cizre after it was fired on by the PKK, the Hurriyet daily newspaper reported.

Elsewhere, local authorities in the southeastern city of Nusaybin said on Monday that a curfew in the town that previously applied to three areas had been widened to cover 11 more.

Similar operations, backed by curfews, are also in progress in the district of Sur in the Diyarbakir region and the Dargecit district of Mardin province.

In its latest death toll, the army said 89 PKK fighters were killed in Cizre since the operation began, including nine on Sunday alone.

With tensions rising throughout Turkey’s southeast, police fired tear gas canisters in the city of Van to disperse a protest of about 500 people against the curfews, arresting 18 people, the Dogan news agency reported.

Turkey has been involved in a fast-escalating conflict with the PKK since a ceasefire broke down in July following an ISIL suicide bomb attack on Kurdish youth activists in the town of Suruc, bordering the Syrian town of Kobane. 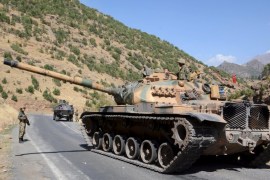