Russian investigators say they will not be able to retrieve flight data from the black box of warplane downed by Turkey in November.

An officer in Russia’s air force on Monday said data from the Su-24 jet could not be recovered from the device because most of its microchips had been destroyed.

“Retrieving the information and a read-out of flight data … has proven to be impossible because of internal damage,” said Sergei Bainetov, the Russian Air Force’s deputy head of flight safety.

The damage was so severe, he said, because of the sheer force with which the plane had hit the ground after being struck by an air-to-air missile, severing a cord that connected the flight recorder and the jet’s avionics.

The defence ministry would now turn to specialised scientific institutions in the hope that they could get something from the damaged chips, he said, saying it was an uncertain process that was likely to take “a lot of time”.

Both Russia and Turkey have exchanged blame for the downing of the jet, with Turkey saying the plane crossed into its territory and Moscow insisting that it was shot down in Syria.

Russia reacted angrily to the incident, arresting Turks in Russia for visa violations and upping its attacks against Turkish-backed Syrian rebels.

President Vladimir Putin has accused Ankara of backing ISIL and buying oil from the group, a charge Turkish officials deny.

Turkey is opposed to Russia’s campaign in Syria and disputes Moscow’s stated aim of attacking ISIL, with officials claiming that the strikes are also targeting opposition groups fighting against Syrian President Bashar al-Assad. 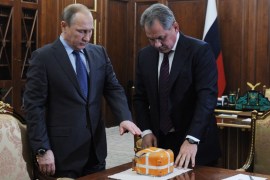 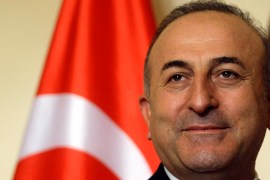 Turkey: Our patience with Russia ‘has a limit’

Foreign minister says Moscow overreacted when it fired warning shots at a Turkish vessel in the Aegean Sea on Sunday.