Intended as a temporary solution for residents made homeless by Israel’s 2014 war on Gaza, the static caravans of Khuzaa – a cluster of around 70 tin-sheet homes on the town’s outskirts, paid for by donor nations such as Qatar and the United Arab Emirates – are scarcely equipped for another winter. Najjar fears that cold temperatures and increased rainfall will make the homes unliveable.

“We live in a horrible situation,” Najjar, a 47-year-old father of three, told Al Jazeera. “This area of Khuzaa is lower than the rest. When it rains, the water settles here.”

“The [caravans] aren’t insulated, and over time, they have shifted,” he added. “The outside air comes in, then it gets hotter or colder depending on the season. We are provided heaters, but they aren’t effective. Last year, we tried to build fires inside the caravan, but we stopped. We know it’s not safe. What if we fell asleep and it caught fire?”

INTERACTIVE: Gaza, a life under siege

The cold, wet weather has serious repercussions for the health of all families living in the caravan camp.

“The health of the people here is always bad,” Mohammed Mohanna, a doctor from the Palestinian Medical Relief Society (PMRS), a grassroots health organisation, told Al Jazeera at his mobile clinic in Khuzaa. “But you can see a big difference in their well-being during winter. It gets much worse.”

The health of the people here is always bad, but you can see a big difference in their well-being during winter. It gets much worse.

Mohanna serves more than 50,000 Palestinians in the northern and middle regions of Gaza every week, and says that some of the toughest cases he encounters are in Khuzaa.

One of the main problems is hygiene. With no plumbing, each caravan is equipped with three large barrels of water for sanitation, but the pipes used to deliver water here were destroyed by recent flooding. Often, there is no way for residents to clean themselves, making the community a breeding ground for bacteria and viruses.

Influenza can even be fatal among residents living in these conditions, he said.

Mohanna recalled one caravan resident who was lucky enough to secure a loan and funds from aid organisations to build a new home in Khuzaa: “I visited him this week. The home has no furniture, no wallpaper; it’s essentially a concrete box with some mattresses and carpets. But for him, it’s a palace. He’ll be warm and clean this winter.”

Some residents have had their homes rebuilt with funds provided by the United Nations Relief and Works Agency for Palestinian Refugees(UNRWA). But reconstruction has been slow for a variety of reasons, including Israel’s siege on Gaza, which has delayed the entry of building materials. UNRWA is also facing a funding crisis, and it was not until October of this year that the first of thousands of completely destroyed refugee homes was rebuilt.

“The cause of the delay in reconstruction is a combination of the siege, and a lack of funds,” UNRWA spokesperson Christopher Gunness told Al Jazeera, noting tens of thousands of families whose homes were damaged in the war have yet to receive any repair funds.

“We tend to conceptualise [the siege] as what is allowed into Gaza, but it’s also about what doesn’t come out – exports,” Gunness said. “If we rebuild it all tomorrow, but they aren’t able to have a thriving economy, then that doesn’t address their needs and concerns as human beings.”

Back in Khuzaa, Najjar says he hopes he will receive aid funds to rebuild his damaged home soon. Najjar’s family has a plethora of health concerns: He suffers from blindness, hypertension and insomnia, and his three-year-old son, Ahmed, has a genetic condition that renders him paralysed. Najjar’s 83-year-old mother, who is blind and has Alzheimer’s, also lives with the family.

Najjar’s brother, Mustafa, who lives in a nearby caravan with his wife, says in addition to the physical health concerns, caravan life also comes with severe psychological repercussions.

“I haven’t slept a good night in more than a year,” he told Al Jazeera. “Sometimes the mice wake me up; sometimes it’s nightmares from the trauma we experienced in the war.”

Najjar says the family’s health challenges were exacerbated after they moved into the 33-square-metre caravan, which houses six people – and the idea of spending another winter here is troubling.

“After one more winter here,” he said, “who knows what problems I’ll develop?” 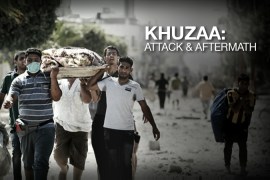 What happened to residents trapped in the besieged southern Gaza town of Khuzaa?