A strong performance by two new political forces in Sunday’s general election has shaken up Spain’s political map, with results showing the ruling Popular Party (PP) winning the most votes but falling far short of a parliamentary majority.

With nearly all the votes counted, the PP looked set to win 122 seats – nowhere near the 176 needed for an absolute majority in the 350-seat parliament.

The Socialist party was projected to come in second with 91 seats, followed by the new anti-austerity Podemos party with 69 seats.

Another upstart party, the centre-right Ciudadanos, was expected to win 40 seats.

The far-left Podemos said the results showed the two-party political system that has ruled Spain’s democracy since the end of dictatorship in the 1970s had come to an end.

“The two-party political system is over and we are entering a new era in our country,” Inigo Errejon, the party’s number two, told supporters in televised remarks on Sunday.

Al Jazeera’s Barnaby Phillips, reporting from the capital Madrid, said that such results “point to a period of political uncertainty, perhaps coalition-building, some other forms of alliances and a real shake-up of what has been a cosy two-party system – at least nationally here in Spain – for the past 40 years or so. Those days appear to be over.”

Phillips said the real worry for the weeks and months ahead is whether any government can be formed.

“You could have an unstable minority government, you could have a very wobbly coalition of all sorts of unlikely partners – three, four or even five parties together. Or is Spain heading for new elections in the new year? Things may become a little bit clearer in the next few days, but it is a very uncertain time in Spanish politics.”

Analysts said the election results could make it extremely difficult for the PP to form a government because it wouldn’t get a majority of seats in parliament by allying with Ciudadanos, its most natural partner.

Podemos and Ciudadanos both gained strength by portraying the PP and the Socialists as out-of-touch behemoths run by politicians who care more about maintaining their own power than citizens’ needs.

“There is a lot of dissatisfaction with the established political elite in Spain,” Antonio Barroso, senior VP at Teneo Intelligence and an analyst specialising in southern Europe, told Al Jazeera.

“The next weeks are going to be very hectic in terms of negotiations between the different parties,” he continued.

“[Prime Minister] Rajoy is going to have a very hard time finding a majority that can support him in parliament and I also think that Pedro Sanchez – the leader of the Socialist Party – is going to try to muster a majority to become Spain’s prime minister.”

Sky-high unemployment, rising inequalities, corruption scandals, and an independence movement in Catalonia were just some of the issues broached during the election campaign. 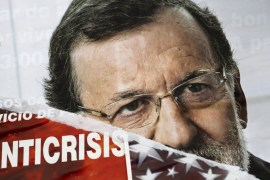 Tension and suspense as polls open in Spain elections