Skala Skamnias, Greece – Dozens of aid workers and volunteers wait on the shore, many of them with binoculars pressed against their faces, as a small dot in the distance gradually takes the form of a dinghy carrying more than 30 Afghan refugees.

A Spanish volunteer lifeguard on a jet ski leads the boat to the rocky coastline safely, and the men, women and children pile off the flimsy inflatable vessel.

As wintry waters grow more dangerous by the day, refugee and migrant arrivals on the Greek island have decreased. But more than 1,000 are still arriving most days.

Meanwhile, Turkey on Monday arrested more than 1,300 refugees hoping to depart from the country by sea in an apparent crackdown.

Twenty-year-old Moroccan, Yasin, says that staying in Morocco was no longer an option.

“I had no options there,” he told Al Jazeera, explaining that he arrived in Lesbos a day earlier after taking a boat from Turkey.

“We don’t have anything to look forward to in our lives. There is no work and people are under pressure by the government.”

Recalling his boat trip from Turkey, Yasin said: “It was very scary, but what else can we do?” He added that he is on his way to the Idomeni border crossing between Greece and Macedonia.

Yasin and others say they intend to continue their journey to Western Europe, despite the worsening weather and border closures. Last week, Macedonia announced that its borders are closed to asylum seekers who cannot prove citizenship in Iraq, Syria or Afghanistan.

“I’m going [to Idomeni] anyway,” he said. “I’d rather die waiting at the border than live in Morocco with no future.”

More than 900,000 refugees and migrants have arrived in Europe by sea so far this year, according to the United Nations refugee agency, UNHCR.

During that period, the UNHCR has documented at least 3,515 people who died at sea or are still missing.

Yasin and his two companions are sleeping in the streets of Mytilene, the capital of Lesbos, for the next two days because ferry tickets to mainland Greece have sold out.

According to the office of Mytilene Mayor Spyros Galanos, between 1,000 and 3,400 refugees and migrants arrived each day in November.

During June, an average of 6,000 people arrived each day, and the number of arrivals peaked on September 11, when 9,500 arrived in a single day.

Since February, 400,000 refugees and migrants have passed through the island, which has a population of 85,000.

“We expected the arrivals to basically stop when winter months started, but that didn’t happen,” Marios Andriotis, a spokesman for the mayor’s office, told Al Jazeera.

Earlier this week, the European Union reached a 3 billion euro ($3.2bn) deal with Turkey to curb the flow of refugees, who are expected to number more than 1.5 million in Europe by the end of the year.

Turkey is hosting an estimated two million refugees and dozens of boats continue to depart from its shores day and night.

“We hope Turkey will start playing its part in this crisis,” the spokesman said. “We want to provide safe passage to refugees. We don’t want to see more dead bodies in the Aegean [Sea].”

Constance Theisen, humanitarian affairs officer for Doctors Without Borders (MSF), says that it’s unclear how many boats arrived in Lesbos and other Greek islands this week.

The arrivals have continued, despite Macedonia sealing off its borders to asylum seekers who could not prove Syrian, Iraqi or Afghan citizenship.

“It’s true there are fewer arrivals, but people are still coming and many haven’t heard about the border closures at all,” she told Al Jazeera.

Claiming that asylum seekers who aren’t from Iraq, Syria or Afghanistan are “economic migrants”, the Macedonian president defended his country’s new policy.

More than 2,000 refugees passing through the country at any time pose “permanent and direct threats for national security”, President Gjorgje Ivanov said.

The closures also resulted in a build-up near Idomeni, where an estimated 2,500 asylum seekers are still camping out. On Saturday, Macedonian border police clashed with many of those stuck at the Idomeni border.

“People who have grounds for persecution should be able to present their asylum cases and receive fair evaluation on an individual basis,” she told Al Jazeera.

“Assigning a collective framework based on nationality is a violation of international refugee law and various treaties. Many of these people appear to have legitimate grounds for applying for asylum.”

Sitting on a bench outside the Mytilene Port, 19-year-old Ahmed says he left Baghdad two weeks ago with the hope of making it to Germany or Sweden.

“I also heard that there are problems at the borders,” he told Al Jazeera. “But we have to keep going. Really, we have nowhere to go back to.” 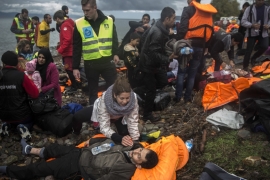 Over 900,000 people reached the continent and 3,563 went missing or drowned trying to make the journey, monitors say. 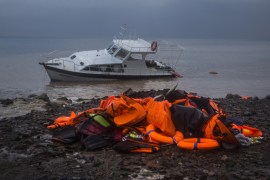 Four Afghan children and two sisters, aged four and one, die after two vessels capsize in separate incidents in Aegean.