At least 75 people have been killed in fighting between troops and Houthi fighters in northern Yemen, military and tribal sources say, amid concern over the ceasefire violations.

The casualties included 28 troops, according to military sources, while tribal officials added that Houthi fighters lost 40 men in heavy clashes on Saturday near the northwestern town of Haradh, which was overrun on Thursday by government forces.

Around 50 Houthi fighters and 40 loyalists were wounded in the clashes, sources said.

“We’re now at a government complex in Hazm,” a military official said. “Some other forces have gone to areas in the northwest.

IN PICTURES: Sanaa, a city of broken glass and shattered hope

“We’ll continue to progress until we’ve reached Saada, Amran and Sanaa. We’ll liberate all Yemeni cities from the Persians and those who want to attack our land, our religion and our dignity.”

Clashes intensified early on Saturday as government forces attempted to advance towards the Red Sea port of Midi and the opposition fighters brought in reinforcements, tribal sources said.

Yemeni forces and allied tribes captured Hazm, the capital of the northern Jawf province, on Friday – the second rebel-held town to fall in 24 hours. 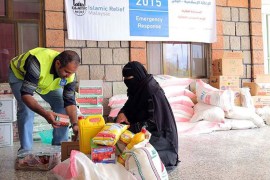