Police in the US state of Texas have arrested a 13-year-old boy after he allegedly made bomb threats, an account disputed by his family.

Armaan Singh Saraai, a Sikh teenager, was detained on Friday last week and held in a juvenile detention centre until his release on Monday.

A spokesperson for the Arlington Police force told Al Jazeera on Friday that Saraai allegedly threatened to blow up his school last Thursday and repeated the threat in detail the following day to another student.

“The other student he was talking to became so frightened that he went to the nurse’s office and officers described his demeanour as ‘trembling’,” Lieutenant Christopher Cook, the spokesman, said.

“We had to evacuate the classroom consisting of 16 students and a teacher until we determined there was no bomb.”

Cook said the teenager was arrested for making a “terroristic threat”.

Saraai had admitted to making the threat, explaining he was joking, and officers proceeded to arrest him, Cook said.

One of Armaan’s relatives has shared an account of his arrest on Facebook that differs significantly from the one given by police.

The teenager’s cousin, Ginee Haer, said Armaan had been accused of carrying a bomb by a classmate she described as a “bully” and that school officials later contacted the police.

“A bully in class thought it would be funny to accuse him of having a bomb, and so the principal, without any questioning, interrogation, or notification to his parents, called the police,” Haer said.

“They [parents] started calling every police department in the area, only to find out he was sent to a juvenile facility.”

Both Haer and Armaan’s brother Aksh Singh have suggested the teenager’s Indian background played a part in his arrest and detention.

In a reference to the Facebook post, which has been shared more than 10,000 times, Cook, the police spokesman, said Armaan had not told the police officers he was being bullied.

On Twitter, many users are comparing the incident to the arrest of 14-year-old Ahmed Mohamed in nearby Irving, after he brought in clock to class and was accused of designing a bomb by school officials.

Ahmed has since filed a multi-million-dollar lawsuit against the school and local officials, and has left the US for Qatar.

This goofball on the left in this picture is my 12 year old cousin, Armaan Singh Sarai. He was born and raised in Texas… 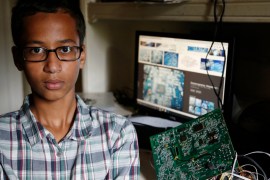 Obama invite comes after Texas boy was arrested when his homemade clock was mistaken for a bomb by teachers and police.

Muslim boy arrested over clock withdraws from US school

Ahmed Mohamed and his siblings have yet to decide which school to enrol in after father withdraws them.