The main Syrian opposition bloc, with allied rebel forces on the ground, says it will not agree to a ceasefire unless Bashar al-Assad signs an agreement to step down as president of Syria.

The comments came on Wednesday as the United States and Russia prepared for the next Syrian peace talks in New York on Friday.

“If they [US and Russia] want to fight terrorism as they say, why not get rid of the main problem, the government that is targeting civilians in Syria everyday?” Nagham al-Ghadri, vice president of the Syrian National Coalition (SNC), told Al Jazeera.

“The US and Russia have always disagreed on the fate of Bashar al-Assad, but agreed on countering [the Islamic State of Iraq and the Levant], which is ironic because instead of getting rid of the root of all problems, they want to tackle an product that is a result of the government.

“It is our basic right to choose what we want for our country. We are not waiting for anyone to tell us that the fate of a Syrian leader lies with the Syrian people. We were born with this right.

“They will meet abroad and negotiate Syria’s future, but at the end of the day the whole world knows that if the Syrian people do not agree on any given political solution, they will not apply it.

“All those people who were killed and the millions of refugees living in tents for the past five years did not go through all this so one day the international community can make up their minds regarding Syria. We will decide our own fate, regardless of all the talks and meetings held by them.”

John Kerry, the US secretary of state, met Russian President Vladimir Putin and Sergey Lavrov, Russia’s foreign minister, in Moscow on Tuesday and agreed to hold the peace process on Syria in New York on Friday.

“We will meet this Friday on the 18th in New York with the International Syria Support Group, and then for the purposes of affirming under the UN auspices what we are doing within that group, and if promoted, that we would pass a UN resolution regarding the Vienna communiques and the next steps with respect to negotiations and hopefully a ceasefire,” Kerry said on Tuesday.

Ghadri, the SNC vice president, said the opposition coalition was not officially invited to the New York talks, but they expressed their views and opinions about the meeting through ambassadors of countries they consider as friends of Syria.

“We know if we were asked to attend the talks in New York, which are going to be a follow-up to Vienna 1 and 2, the Syrian government would want to attend too. We refuse to negotiate with the government at this point,” Ghadri said.

The Syrian opposition met in Riyadh last week and agreed on a transitional government in the country that does not include Assad.

The SNC, headed by Khaled Khoja, aims to replace Syria’s current leadership with a transitional government after achieving international recognition.

“Many factions signed the agreement in Riyadh which highlights and stresses on the importance of Assad leaving. If some day we were left with no choice but to sit at the same table as the government, we will, but nothing the Syrian people do not want will be applied in our country,” Ghadri said.

“As we speak there are Russian jets targeting two areas in Latakia suburbs, where there is absolutely no presence for ISIL or al-Nusra Front. Why? It is now clear, the intention is to target the Syrian rebels and not ISIL or al-Nusra. They mock us by saying they are targeting ISIL.”

Kerry and Putin agreed to continue what they called a final stage on listing terrorist organisations and on providing assistance to the UN in forming the opposition delegation that should be representative and that should be ready for negotiations with the Syrian government. 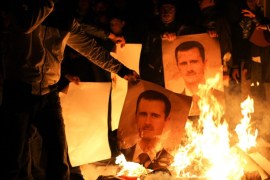 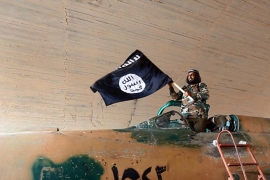