Iran violated a United Nations Security Council resolution in October by test-firing a missile capable of delivering a nuclear warhead, a team of sanctions monitors said, leading to calls in the United States for more sanctions on Tehran.

The White House said it would not rule out additional steps against Iran over the test of the medium-range Emad rocket, on the same day that the global nuclear watchdog concluded its 12-year investigation into Iran’s nuclear activities.

The Security Council’s Panel of Experts on Iran said in a confidential report, that the launch showed the rocket met its requirements for considering that a missile could deliver a nuclear weapon.

“On the basis of its analysis and findings the Panel concludes that Emad launch is a violation by Iran of paragraph 9 of Security Council resolution 1929,” the panel said.

The finding from the panel could trigger moves to impose sanctions on Iran, although such a decision would require agreement from China and Russia.

The two countries along with Britain, France, Germany and the US took part in successful negotiations on the landmark deal reached with Iran in July on curbing Tehran’s nuclear programme.

Diplomats said the rocket test on October 10 was not technically a violation of the July nuclear deal between Iran and world powers.

In Washington, a senior US administration official stressed that sanctions had already been imposed over the UN ban on ballistic missile launches but that more Iranian entities could be blacklisted.

France emphasised the importance of an “appropriate response” after the UN report’s findings and Britain’s envoy Matthew Rycroft said the council must “respond effectively to what appears to be a breach”.

Iran has said any new sanctions would jeopardise the nuclear deal.

The UN panel’s report was dated last Friday and went to members of the Security Council’s Iran sanctions committee in recent days. The report came up on Tuesday when the 15-nation council discussed the Iran sanctions regime.

It said the panel considered ballistic missiles capable of delivering nuclear weapons to be those that can deliver at least a 500kg payload within a range of at least 300km.

Iran’s UN mission did not respond to a request for comment. In October, Tehran disputed the Western assessment that the missile was capable of delivering a nuclear warhead.

On a day of mixed messages, the report was delivered on Tuesday as the International Atomic Energy Agency’s 35-nation board decided to close its investigation of Iran’s past nuclear activities, throwing its support behind Tehran’s deal with major powers.

“The agency has no credible indications of activities in Iran relevant to the development of nuclear explosive devices after 2009,” said IAEA Director-General Yukiya Amano.

“Nor has the agency found any credible indications of the diversion of nuclear material in connection with the possible military dimensions to Iran’s nuclear programme.”

US Secretary of State John Kerry welcomed the decision to close the investigation into whether Iran once had a secret nuclear weapons programme.

Al Jazeera’s Gabriel Elizondo, reporting from the UN in New York, said the UN now had to make a decision about what action it would take regarding the October 10 test.

“Essentially, the IAEA signalled they wanted to move forward on the Iran nuclear deal, rather than further probe Iran’s past nuclear activities,” our correspondent said.

“And here at the UN, the divided Security Council is now faced with what – if any – action they’ll take.” 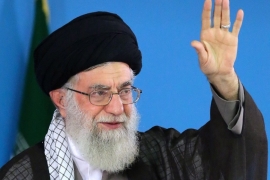 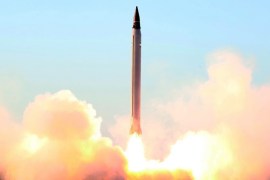 US, UK, Germany and France push for inquiry into Tehran’s test of missile they claim can carry a nuclear weapon.