In the first incident, air strikes on a fuel market in the village of Maaret al-Naasan killed 16 people and wounded dozens more, the UK-based Syrian Observatory for Human Rights said.

The market in the rebel-held village in Idlib province mostly sells diesel brought from areas under the control of the Islamic State of Iraq and the Levant (ISIL).

“This is part of the campaign against Daesh [ISIL],” Observatory chief Rami Abdulrahman was quoted as saying by The Associated Press.

Another 18 civilians, including four women, were killed after strikes on a market in a village held by ISIL in northern Aleppo province, the Observatory said according to AFP news agency.

The group put the death toll at 25 in Aleppo’s Maskaneh village and said dozens were killed and wounded in Maaret al-Naasan in Idlib.

It was not immediately clear whose warplanes carried out the strikes, although the monitoring groups accused Russian aircraft of targeting both markets.

More than 250,000 people have died since Syria’s conflict erupted in March 2011, and millions have fled their homes in the war-torn country. 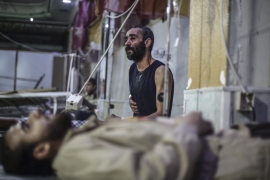 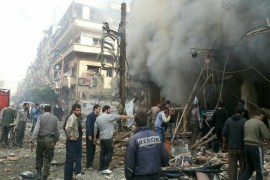 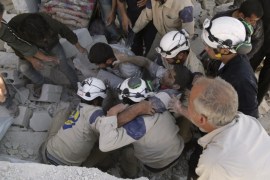