All schools in Los Angeles were closed on Tuesday after officials reported receiving an unspecified threat to the district, the second-biggest in the country.

Officials said the threat, which came via an electronic message, is still being evaluated.

“It was not to one school, two schools or three schools, it was many schools, not specifically identified… That’s the reason I took the action that I did,” Ramon Cortines, superintendent of the school system, told reporters at a press conference.

“I am not taking the chance of taking children any place into the building until I know it’s safe.”

About 640,000 students were affected in more than 900 schools in the Californian district.

Los Angeles police and the FBI were notified of the threat and were investigating, officials said.

“It’s being described as a threat that’s specific yet broad, so that all schools had to be shut down and checked,” reported Al Jazeera’s Rob Reynolds from Los Angeles.

A husband and wife went on a shooting rampage on December 2 in San Bernardino, California, killing 14 people and wounding more than 20 others at a holiday party.

The Islamic State of Iraq and the Levant (ISIL) group hailed the perpetrators and called them soldiers of the caliphate. 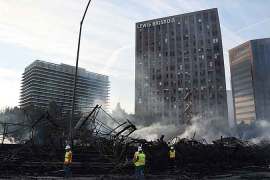 Highways shut down during morning commute in US city’s business district after blaze engulfs multiple buildings. 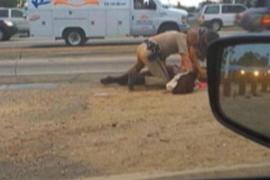 Motorist’s clip shows policeman straddling woman and repeatedly punching her in head on side of California highway.