A Palestinian was shot dead on Monday after allegedly plowing his car into a West Jerusalem bus stop and injuring 10 people, one seriously.

Ten people were wounded in the incident, one of whom was in a critical condition, police said.

Israeli Channel 2 TV News showed a white Mazda that barrelled into the bus station on the pavement of a busy road.

Since early October, 120 Palestinians, 22 Israelis, an American and an Eritrean have been killed in the violence.

The latest violence began with a dispute over access to the site of the al-Aqsa Mosque – sacred to both Jews and Muslims – but has since escalated into what many fear may become another full-blown Palestinian uprising.

Meanwhile, Israeli warplanes hit bases of Hamas in the Gaza Strip overnight, following an alleged Palestinian rocket attack on Israel that caused no injuries, the Israeli army said on Monday.

Palestinian officials in Gaza said the Israeli strikes damaged a training camp of Hamas’ armed wing, the Ezzedine Al-Qassam Brigades, and of its naval force, according to AFP news agency.

No injuries were reported. 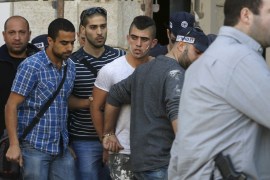 Fatal shooting of 17-year-old occurs a day before expected verdict on burning death of 16-year-old Abu Khdeir in 2014.