Bethlehem, occupied West Bank – Shadi Hatem was standing among a group of fellow Palestinian journalists, covering clashes in al-Bireh near Ramallah last month, when he was shot at close range with a rubber-coated steel bullet.

Medics treated Hatem’s leg, which quickly swelled and bruised, at the scene. But instead of allowing them to take him to hospital, Hatem decided to stay and continue working on principle.

Palestinian journalists have long been targets of both Israeli forces and the Palestinian Authority (PA). On Reporters Without Borders’ World Press Freedom Index, Israel ranks a lowly 101st and Palestine 140th out of 179 countries.

There has been a big increase in violations documented by various press freedom organisations since the start of October as Palestinians protested against Israel’s ongoing occupation in Palestinian communities inside Israel and across the occupied West Bank, including East Jerusalem, and the Gaza Strip.

Hatem said that as far as Israel was concerned, the fact that he is Palestinian overrides any press protections entitled to him. “Images are dangerous for the Israelis. They know that, and stopping those images from being transferred to the world is important for them,” he said. “Today was not the first time I have been targeted by the Israeli army for doing my job, and it won’t be the last.”

During November, Reporters Without Borders documented at least three instances in which Israeli forces closed down Palestinian media outlets, confiscating equipment and ransacking offices on the grounds that the outlets were “inciting violence”.

Jason Stern, a research associate at the Committee to Protect Journalists, confirmed there had been a “spike” in assaults and raids on journalists and press offices, but said the committee was still in the process of compiling the exact numbers.

“We’ve definitely been following a recent spike in assaults and raids committed by Israeli security forces, which is unfortunate in times of increased tensions like these, when it’s really important to have a free flow of information,” Stern said.

According to a report released by the Palestinian Ministry of Media earlier this week, 98 Palestinian journalists were injured by Israeli forces during the months of October and November.

On October 30, Israeli border police attacked and pepper-sprayed an isolated group of journalists and medics in a separate incident in al-Bireh, which was well documented by other journalists at the scene. The resulting images went viral on social media.

While Israel accounts for the majority of violations committed against Palestinian journalists, the PA has also been responsible for cracking down on press freedoms in recent months, including an incident in late November when it  ordered Hamas-supported al-Aqsa Television to suspend its broadcasting indefinitely. A spokesperson for the PA’s Palestine Press Syndicate declined to comment on the incident.

MADA found an “enormous escalation” of violations in 2015 carried out by both the PA in the occupied West Bank and Hamas in the Gaza Strip.

It documented 110 Palestinian violations against Palestinian journalists in the first six months of 2015, compared with 114 violations in all of 2014.

On September 18, Abed al-Qaisi, a Palestinian freelance journalist, was covering a protest in the West Bank city of Bethlehem when violence broke out.

“The boys were marching towards the [separation] wall to confront Israeli soldiers at their military base behind the gate, but all of a sudden PA forces came out and blocked the protesters,” Qaisi recalled. “I was out filming when the PA tried to take my camera. They were too distracted by the protesters to really fight me for it, though, so I got away.

“The PA forces had moved forward to try and detain some of the boys, and they just started beating them.”

Qaisi caught the incident on film. When he saw that the police had noticed him filming he went straight home to upload the video.

By the next day, it had spread  across social networks and the international media. Rami Hamdallah, the Palestinian prime minister, condemned the police brutality.

“Palestinian journalists are targeted from all sides, even their own government.”

As if it isn't enough to worry about the occupation government, Palestinian journalists are targeted from all sides, even their own government.

In 2013, Mohammed al-Azza, another Palestinian photographer from the occupied West Bank, was shot in the face with a rubber-coated steel bullet by Israeli forces .

The young man still has to see his doctor every few months to monitor his eye and reconstructed facial bones. Azza said doctors told him that if the bullet had hit an inch higher, he could have lost his eye – or worse, had the bullet lodged in his brain.

Following the incident, Azza was detained by Israeli forces on two separate occasions, which were documented and condemned by Reporters Without Borders.

Since then, Azza has helped to create a journalism training programme for Palestinian youth at his refugee camp’s community centre, teaching future media professionals the basics of the trade, as well as how to deal with violent press censorship inflicted on Palestinian journalists.

“As we are seeing with all the problems journalists are facing just over the past few months, these kinds of things aren’t going away,” Azza said.

“Just doing our jobs puts our lives in danger. It shouldn’t be a normal thing, but for us it is. All we can do is stick together and try our best to help keep each other keep as safe as possible, while getting the news out to the people.”

Disclaimer: Sheren Khalel accompanied Abed al-Qaisi during the incident and has worked with him on multiple occasions. 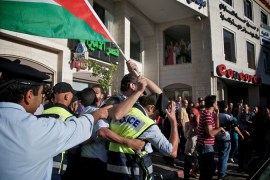 Hamas and the Palestinian Authority have committed at least 500 press freedom violations since 2007, rights group says. 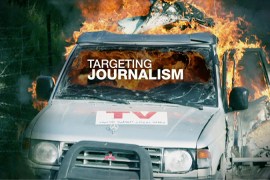 Across the world, journalism is a profession under assault – and nowhere is this more true than in the Middle East. 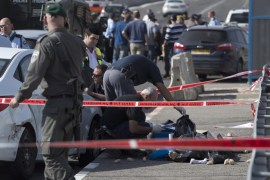