The main islands of Japan have just been swept by a wave of rain of record-breaking proportions. Strong winds accompanying the downpour caused damage in many places on land and at sea.

The rain came up from the south during Thursday afternoon and lasted for about 18 hours. In that time it threw 281mm of rain at Owase, most of that falling overnight. Sumoto, on Osaka Bay, racked up 243mm which makes it a December record.

Shizuoka prefecture reported a tremendous 315mm which makes it the wettest place in Japan for this event. The storm swept through Kyushu, Shikoku and Honshu and, as far north as Ofunatu in Iwate prefecture, the rain fell to a depth of 54mm.

Wind damage was obvious in Kobe where the Luminaire display, a comemmoration to 1995 earthquake victims, was demolished. The peninsula at Muroto on Shikoku recorded a gust of 106kph in the middle of Thursday night.

This strength of wind drove a container ship onto the rocks of Wakayama.

Within 24 hours it was over and it seemed like summer had returned. Owase basked in 26C on Friday afternoon although the westerly breeze was still considerable.

Tokyo, the recipient of a mere 56mm of rain, warmed up on Friday to 24C – December hasn’t been this warm for five years.

Believe it or not, the storm was only just developing as it swept through Japan. Now on its way past the Aleutian Islands, it is becoming more violent and over this weekend it could become the strongest recorded storm to impact the region.

A little over a year ago, ex-Super Typhoon Nuri became the most powerful system on record to cross Dutch Harbor, which is found in the Aleutian Islands. Nuri had a central low pressure of 924 millibars and the coming storm may well deepen to 930mb.

This produces steady winds of 120kph with much higher gusts and is equivalent to a Category 1 hurricane on the Saffir-Simpson scale. 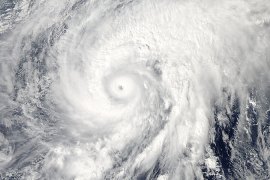 Japan’s near miss with Nuri

A ferocious Super Typhoon is expected to pass very close to the country in the coming days.