Sarajevo, Bosnia – It does not take much for Drazen Huterer to remember the Bosnian war. After just a few beers and a brandy, the memories come rushing back.

He was only eight when someone left the body of a dead Chetnik – a Serb nationalist guerrilla fighter – outside his apartment block during the siege of Sarajevo. He remembers when a friend put a firecracker in the fighter’s mouth, and how the blood seeped out of the eyes, ears and nose when it exploded.

It’s been 20 years since the leaders of Bosnia, Serbia and Croatia signed the Dayton Peace Agreement on December 14, 1995. Dayton brought peace to Bosnia that still holds today.

But this is still a country stained by war. The children who grew up dodging sniper bullets are now in their 20s and early 30s and their memories, like Drazen’s, are not buried very deep.

In Sarajevo, the country’s capital, residents are surrounded by reminders of conflict. In a backstreet, painted on a wall, giant red letters spell out “Srebrenica“, the name of the town where 8,000 Bosniaks – Bosnian Muslims – were killed by Serb forces.

To stop the fighting, the United States-brokered Dayton agreement split the country into two entities – one part, the Bosnian Federation, became home to a majority Bosniak and Croat population. Another part, Republika Srpska, became dominated by ethnic Serbs.

Drazen would have been called a Croat 20 years ago. Today, he calls himself a Sarajevan. But many young people in Bosnia are still growing up separated by ethnicities and war-time divides. They live in a divided country ruled by nationalist politics, nationalist media, and segregated schools.

Kemal Pervanic is founder of the reconciliation project Most Mira, which encourages dialogue between young people from different backgrounds.

“A lot of kids [in Bosnia] are being taught to hate each other,” Pervanic says. “This is a direct consequence of community or group divisions produced by the war. Where politicians have failed to acknowledge and address openly the wrongs from the past, the negative legacy of the war is being transferred to the next generation.”

He says politicians are mainly to blame, but teachers and community leaders are also responsible for reinforcing divides.

Here, Bosniaks Dzenan and Muris sit in a cafe smoking shisha. These are not their real names; they ask to remain anonymous as they are uncomfortable discussing the country’s divisions.

Dzenan and Muris were just four and seven years old, respectively, when war broke out. But their anger feels fresh. During the war, Bosniaks suffered most. They were the target of ethnic cleansing and rape on a mass scale.

Although war crimes were carried out by all sides, a CIA report blamed Serbs for 90 percent of atrocities.

Serb forces pummelled Sarajevo for almost four-years; the longest siege in modern history. Although both Dzenan and Muris were sent away to neighbouring countries, they came back as soon as the fighting stopped. And their absence has not stopped them from developing strong opinions.

They say many war criminals “hiding in Serbia” will never be brought to trial.

They gently hint that Republika Srpska should not exist. “This is my country,” says Dzenan.

But they feel threatened in Serb-majority areas. “Here in Sarajevo Serbs will wear T-shirts with war criminals printed on them. But if we go to Serb areas wearing a Bosnian football shirt, then we will be attacked,” he says.

They mention several incidents this year when Bosnians were attacked by Serbs in Republika Srpska. But they insist that today’s divide is not based on ethnicity, it is political. They both have Serb friends.

“But if I meet a Serb who’s a nationalist,” says Dzenan, “how can we be friends?”

Dzenan and Muris are both still studying, but they are bleak about the prospect of finding a job after university. Youth unemployment here is the highest in the world, according to the World Bank, hovering at about 60 percent.

Muris believes this is the other reason why young people become enthralled by divisive politics.

“People here are hungry and they have nothing to eat but nationalism,” he says.

Nationalist politics and geographical divides are not the only sources of war-time tension. Trans-generational trauma has long been linked to countries that experience war or genocide. For years, academics have noticed how the psychological effects of war can slip between generations; trauma can be transmitted from parents who experience war first-hand to their children who have only hazy memories.

“We are all traumatised,” says psychologist Semsa Sabanovic as she finishes her cigarette outside Islamic Relief’s Sarajevo office. Working on Islamic Relief’s Pass it Forward campaign, Semsa helps Bosnians who are still suffering psychologically from the war.

“Young people also need to be listened to,” she says. “Their parents’ memories can become their own.”

She explains how victimisation symptoms such as “avoidance” can be transferred between generations.

“When a mother talks about [losing her husband], she cries and gets ill. Children witnessing that either learn to respond in the same way or they try to protect their mother from re-traumatising over again, avoiding the topic of the father.”

The country’s high unemployment means there is little distraction. Semsa says without work people here look for other ways to escape.

“Smoking or misusing drugs or alcohol is related to the very early trauma of having a lack of love, safety and security,” she says.

In Republika Srpska, Serbian flags hang in clear view of the train line leading from Sarajevo.

Sabina is half Serbian and half Muslim, which makes her a minority in her hometown of Banja Luka, the capital of Republika Srpska, where she has lived since she was three.

“When I was younger I used to say that I am a Serb because I was raised in that kind of area where Serbs are the majority,” she says. “In my elementary school I was in a class of 30 pupils and only two of us were children from a mixed marriage. And in high school, I was the only one who was half Muslim.”

Sabina, 27, can see how war-time tensions have seeped from one generation to the next.

“One of the biggest problems that this area has is nationalism, especially between young people. In the past and even today there is constant need of Serbian people who live in Bosnia and Herzegovina to ‘unite’ Serbians from Republic of Srpska with Serbia as a country,” she says.

But like many people throughout the country, Sabina is sick of the never-ending division.

“I do not want to live in such a society, always obsessed with the past and not the future,” she says. 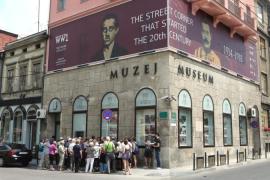 100 years after WWI: History lessons from the Balkans

The Balkans are still split on historical narratives about the assassination of Franz Ferdinand. 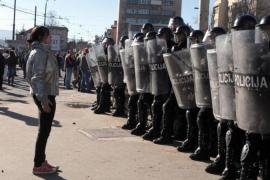 Why are the Balkans boiling again?

The Bosnian protests reflect socio-political dynamics that are going on not only in the Balkans but the whole of Europe.