Two Syrians have been arrested in Switzerland on suspicion of making and transporting explosives days after a “terrorism threat” alert was issued for Geneva.

The two suspects – detained in Geneva on Friday – are accused of the “manufacture, concealment and transport of explosives and toxic gases”, the federal prosecutor’s office said in a statement on Saturday.

They are also under suspicion of allegedly violating Swiss law prohibiting groups such as al-Qaeda, the Islamic State of Iraq and the Levant (ISIL), and “similar organisations”, it added.

Geneva prosecutor Olivier Jornot told journalists on Saturday the two men carrying Syrian passports only recently arrived in Switzerland and could not speak any French.

He added, however, they have not been clearly linked to four men wanted by Swiss authorities over suspected ties to ISIL.

The arrests follow Thursday’s announcement of a “terrorist threat in the Geneva region”, prompting the area to raise its alert level to three on a five-point scale.

Armed police were deployed at sensitive locations across the city, which borders France and is home to the United Nations’ European headquarters.

Photographs of four individuals suspected of links to ISIL – which claimed last month’s Paris attacks that killed 150 people – were published by media across the country. 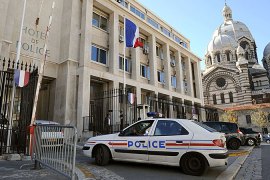 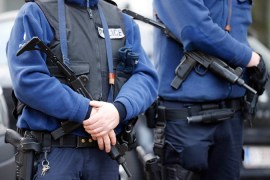