The front-runner for the presidential race in the Philippines has admitted on national radio that he killed at least three men suspected of kidnapping and rape in his city, drawing condemnation from international rights groups who warned against an escalating “culture of impunity” in the country.

Amnesty International urged Philippine prosecutors on Friday to look into Rodrigo Duterte, mayor of the southern city of Davao, who said in an interview that shooting “criminals” is justifiable.

“Human rights is not a joke,” Santos added.

In an interview with a national radio programme on Wednesday, Duterte recounted that three months into his first term as mayor in 1988, three rape and kidnapping suspects had demanded a ransom from the family of the victim.

Duterte, 70, said that when the armed suspects showed up to collect the money, he did not hesitate in shooting them dead.

“I was part of it. Actually, I was the most active and I even emptied two magazines of my .45 [handgun] ,” he said in a mix of Filipino and English.

A day earlier, the mayor, who is known for his sarcasm, told reporters in Manila that he killed about 1,700, when asked if he was connected to the alleged summary executions of 700 people.

According to the latest nationwide polls ahead of the May 2016 election, Duterte has a solid lead against his rivals, including the incumbent vice president, Jejomar Binay, and Manuel Roxas III, a former senator endorsed by President Benigno Aquino.

Supporters previously told Al Jazeera that they like Duterte’s “straight-talk” and his record of achievement in Davao, the largest city in the Philippines by geographic size, which ranks as one of the most progressive areas in the country.

Duterte has been mayor for seven terms, presiding in total for more than 22 years. He has also served as vice mayor and congressman in the city.

But he has also gained some critics recently and was forced to apologise when he was caught cursing Pope Francis, a very popular figure in the Catholic-majority country.

“It is outrageous that a man running for president can openly boast about illegal extrajudicial killings that he committed instead of being held accountable,” she told Al Jazeera.

“As our tribunal found, impunity for egregious human rights violations is a serious and ongoing problem in the Philippines, as exhibited in this case.”

In the past, media critics have also been targets of Duterte’s ire.

In 2011, he flashed his middle finger on national television, as he scolded “columnists” who criticised his politician-daughter, who was involved in beating a court sheriff.

Shawn Crispin, Southeast Asia representative of the Committee to Protect Journalists (CPJ), said that for a country with one of the highest unresolved media murder rates in the world, Duterte’s latest declaration is “a callous and dangerous message Filipinos should reject not embrace”.

“The Philippines needs its next national leader to end, not promote, impunity in extrajudiciary killings,” he told Al Jazeera.

According to the CPJ, there have been 77 journalists killed in the Philippines since 1992, with the Philippines ranking fourth in the worldwide murder index, behind Somalia, Iraq, and Syria.

From New York, Robert Dietz, Asia coordinator of CPJ, also weighed in on Duterte’s candidacy, comparing him to presidential candidates in the US who are “trying to outdo one another with ever more tough-guy, hardline posturing”.

Dietz said that it would be “tragic” if Duterte’s “gun-slinging tactics” are elevated to the national level, in a country where the world’s bloodiest one-time massacre of journalists occurred in 2009.

“The Philippines should not return to the past, when Ferdinand Marcos, another populist candidate, came into power as a reformist, only to become a dictator,” said Dietz, a long-time journalist who had covered Southeast Asia, including the Philippines, for CNN and Asiaweek magazine.

On Wednesday, Duterte had also said that he supports giving a hero’s burial for Marcos, who had been accused of ordering thousands of tortures and murders during his rule, which ended in 1986.

In Manila, Santos of Amnesty International urged Filipino voters to consider the human rights platform of national and local candidates in choosing their next leader.

“If the government is not doing something to address human rights concerns, then we have to claim [our rights for ourselves],” he said.

“It is equally as important as the campaign against corruption and the drive for more economic growth. [Our rights] cannot be taken away from us.” 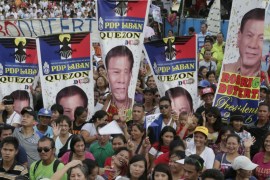 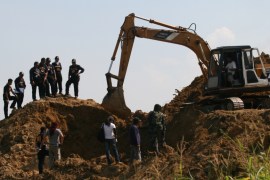 All but one of the 21 officers found guilty of grave misconduct during attack in Maguindanao that killed 58 people. 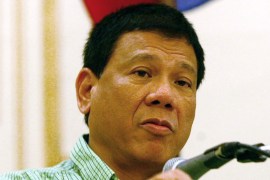