The annual conference of Zimbabwe’s ruling Zanu-PF party is under way, with the disastrous state of the economy as a major talking point.

Another issue in focus is the growing question mark over who will succeed 91-year-old President Robert Mugabe.

He has not named a successor and there is a growing power battle behind the scenes.

The president said on Wednesday that the party was in danger of splitting and accused rival factions of stoking division as they position themselves to eventually succeed him.

Without naming anyone, Mugabe told the ZANU-PF central committee that there were groups in the party that were openly and secretly manoeuvring to secure influential positions, which he said was disturbing the efficiency of the party.

“There is said to be now these groups following the leadership, and the leaderships are not very clear, that they would want to see lead the party,” said Mugabe.

“And so, we have a problem at the moment that threatens to split the party,” he said.

Local media have been running stories alleging that a group of young ZANU-PF members called G-40 was rallying behind Mugabe’s wife Grace, urging her to enter the race to succeed her husband in an effort to thwart Vice President Emmerson Mnangagwa.

Mnangagwa, a secretive confidante nicknamed “Crocodile” in the Shona language, who replaced Mujuru last year, remains favourite to take over from Mugabe.

But Mnangagwa, 73, may have to wait for a while longer as ZANU-PF’s annual conference, which opened on Friday, is expected to confirm Mugabe as its candidate in the next presidential election due in 2018.

Mugabe, 91, has ruled the Southern African nation since independence from Britain in 1980.

“Zanu-PF officials say they would want President Robert Mugabe to run again,” Al Jazeera’s Haru Mutasa reported from the conference in Victoria Falls. “But ordinary Zimbabweans are worried about the health of Africa’s oldest leader.”

Last year in December, Mugabe fired Joice Mujuru, his deputy of 10 years, who was seen as very likely to succeed him. He accused her of fanning factionalism in ZANU-PF and plotting to remove him from power. Mujuru has denied the charges. 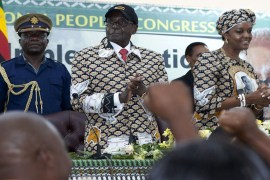 As the long-serving president celebrates with a lavish party, Zimbabweans weigh in on his leadership. 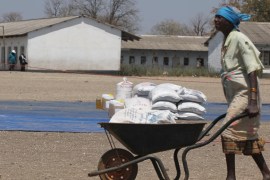 Despite government intervention to stop employers laying off staff, the number of people without work is growing.