Thai police have arrested the creator of a Facebook group that opposes the government for allegedly posting pictures and content that “insult the monarch”, local media say.

According to Matichon, an online Thai news portal, Burin Thongprapai, the country’s top legal officer, has announced plans to prosecute Thanakorn Siripaiboon, who was behind the “National Institute of Red Shirts” online group, for royal defamation.

Police are also gathering evidence against 20 others who were administrators of the group, as well as any members of the Facebook page who shared or “liked” “inappropriate” posts from the group, Matichon reported.

Thongprapai told AFP news agency that Thanakorn, a car spare-parts factory worker, was arrested at his home in Samut Prakan, near Bangkok, and charged with sedition, lese majeste and computer crimes.

On December 2, Thanakorn “liked” a doctored photo that portrayed Thai King Bhumibol Adulyadej in a negative light and shared it with 608 friends, Burin said.

He said he had confessed to the charges and faced up to 32 years in jail.

Under Thai law, anyone convicted of insulting the king or queen, heir or regent can face up to 15 years in jail on each count.

Thanakorn also shared an infographic about Rajabhakti Park, a multimillion-dollar park built by the military under construction contracts allegedly riddled with kickbacks and inflated costs.

“He admitted that he posted the infographic of Rajabhakti Park to incite members of the group” to oppose the military, Burin said.

The arrest comes as the US ambassador to Thailand also reportedly faces a police investigation for royal defamation over a speech he made last month, in which he expressed concern over lengthy sentences handed to civilians for lese majeste.

Prosecutions over anti-monarch dissent have surged since the power shift, with the military leadership claiming to be a serious supporter of the monarchy.

Last month, a woman handed herself in to police and was charged with sedition for sharing the same Facebook infographic about the park scandal. Police said she was still under investigation.

Two prominent opposition figures and dozens of students were detained in separate incidents earlier this month while trying to visit the park and draw attention to the corruption scandal.

The military leadership, including General Prayut Chan-O-Cha, the prime minister, has insisted there is no corruption in the park case but the accusations have still persisted in local media. 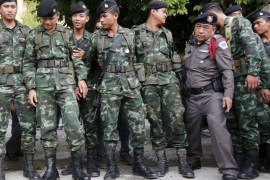 Army begins trust-building exercise to try to convince separatists living over the border in Malaysia to return home. 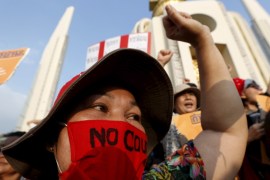