As world leaders push for a climate change deal in Paris, Tibet, commonly known as “the roof of the world”, is facing a severe environmental crisis as many of its glaciers melt rapidly because of rising temperatures, Tibetan activists say.

“That’s our call for the COP 21 [UN climate change conference] in Paris,” he told Al Jazeera from the conference, where he is representing the Tibet Policy Institute.

The Tibetan plateau is home to 46,000 glaciers which are the source of major rivers flowing down to many Asian nations, including India and China.

“Nearly 1.3 billion Asian people depend on water that originates in Tibet. But due to climate change, glaciers are melting twice as fast as the rest of the world,” Lobsang Yangtso, a Tibetan activist attending the COP 21, told Al Jazeera.

“It’s an issue of water security,” said Lobsang, who is part of 185 Tibet activist groups.

Located 4,000 metres above sea level and with an area of 2.5 million square km spread at the top of the Himalayas, the Tibetan plateau is the highest and the largest plateau on earth.

“Asia’s six biggest and most important rivers have their source in or originate Tibet and flow into the 10 most densely populated nations of the world, including India and Pakistan. Changes on the Tibetan plateau will have implications in these countries,” Tempa said.

“Immediate consequences will be flooding and untimely rains,” he said.

With just one day left in the COP 21 summit, global leaders are engaged in last-minute wrangling to try to arrive at permissible cuts to emission levels that are causing global temperatures to rise rapidly.

Industrialised nations are trying hard to convince developing countries such as India and China to share more of the burden.

Tibetan activists say the world should not ignore Tibet, as rivers originating from here support one third of world’s population.

China has built a number of dams and runs a large number of mining activities in the Tibet region, which has resulted into displacement of Tibetan nomadic people.

“More than two million nomads have been displaced from their land by the Chinese. Tibetan nomads are leading an unsustainable livelihood. Younger generations are losing Tibetan culture and language,” Lobsang said, adding that “Tibetans should be included in the climate mitigation and adaptation process”.

“Tibet peoples’ voice should be included in policy making. The Chinese government should also recognise that Tibetan people are not the problem – they are the solution to the environment problem,” she said.

Tibetan people accuse China of ignoring their environment and undermining their culture and Buddhist religion.

Their spiritual leader, the Dalai Lama, said recently in a video message: “This blue planet is our only home and Tibet is its roof.

“The Tibetan Plateau needs to be protected, not just for Tibetans but for the environmental health and sustainability of the entire world.”

The Dalai Lama fled to India in 1959. He established a government in exile which has its headquarters in the northern Indian hill city of Dharamsala.

Activists say they are aware the degradation of Tibet’s environment may not get the attention of those at the high table of the negotiators at the global summit.

“We cannot just rely on governments. We should come together and work, it is not just about government, it’s about people. They are the most affected by climate change,” Lobsang said.

“Our aim is to build networks with civil society groups, NGOs and scientists who really care about the environment.” 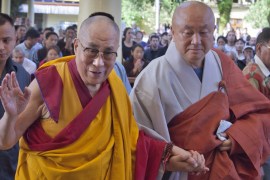 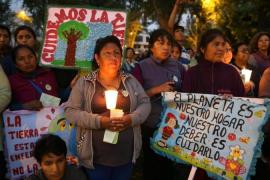 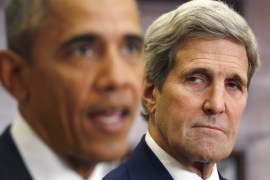