The agenda of the 36th meeting of the Gulf Cooperation Council, which ends on Thursday, has been devoted to addressing key explosive regional crises from Syria to Yemen, to Iraq and the Islamic State of Iraq and the Levant (ISIL).

However, according to analysts the biggest challenge facing the GCC states today is to speak in one voice in addressing many of these problems.

Al Jazeera speaks with a number of GCC analysts on what they perceive to be the key threats facing the region.

There are two sets of threats facing the GCC region: economic threats, mainly from falling oil prices, and the  water shortage crisis that the GCC will face in the next 20 to 30 years.

Then there are the security threats. ISIL is number one on the list as it represents a threat to the map of the Middle East by seeking to change the dynamics of the power balance in the region, and domestically as we witnessed with the terrorist attacks in Saudi Arabia and Kuwait.

I think the rest of the GCC states are vulnerable to such attacks; so more security cooperation between the GCC systems should be focused on deterring terrorism in their homeland.

At the same time there should be further collaboration between the GCC and international partners in countering ISIL in Iraq and Syria, but mainly in Syria since ISIL cannot be separated from the political crisis in Syria.

I think the GCC should adopt an open relationship with the Iraqi government and try to initiate an open dialogue about its expectations for the future of Iraq.

In Syria we should collaborate with the moderate oppositions along with the international partners to find a political solution in Syria.

While it is easy to review the situation now and argue that some sort of funding indirectly went to the wrong hands in Syria – and that is a fact – that was before ISIL came on to the scene.

Falling oil prices is another challenge/threat that will tighten up the budgets across the GCC region.   So GCC states will need to collaborate more in terms of energy sectors, water supplies, coordination of oil policies and even linking their economic projects to cut the cost.

I think crisis situations create a favourable environment for efficient corporations in the GCC countries, and I hope we will see it playing out on the ground.

We want the GCC to move from corporation to union or a more closely knitted framework – like a federation.

This is the only way to bring about a GCC unified stand vis-a-vis issues related to its future.

Terrorism is a key threat, and I think the terrorism in Iraq and Syria poses a greater threat to the domestic structures of the GCC region.

We saw how it wreaked havoc in Bahrain, Saudi and Kuwait. There are two ways to address this threat: through a vigilant population and the concept of citizenship based on equality.

Second, I’m a strong advocate of dialogue with Iran based on a set of rules including non-intervention and incitement. Iran feels that it has a historical role to protect Shiism in the region, and that’s a destabilising factor.

However, dialogue with Iran is very important.

Changing the mindset of both the Iranian and the GCC negotiator may prove difficult now, but there must be a receptive mindset to negotiation, to dialogue with Iran.

The Iranian mindset, at present, does not lend itself to give and take. It is in a frame of mind of “take it or leave it”.

Another issue is plunging oil prices. Without a correction in the price of oil, the GCC states will suffer, not only domestically but also in their programmes to help developing countries, as well as in their contribution to international organisations.

The Gulf’s unique position will be undermined if oil prices continue to plunge, and energy, which is now based on renewable energy or shale oil and which is getting cheaper with the advance of technology. The GCC states are in danger of losing their prestigious position.

This prestige always makes them the first in diplomacy, in international economic contribution, in the economy and prosperity of the world.

The stability of the Gulf is a demand of the international community. If GCC countries lose this unique position they will be like any other group of countries, which is very bad.

The war in Yemen also poses a threat and it will have to end. Of course it’s affecting the GCC region. It is bleeding the GCC. It’s not only finance, not only politics, it is really something that takes a lot of energy,  nerve, patience and goodwill from the GCC.

So there must be a solution, hopefully through United Nations Security Council mediation.

Lastly, the GCC is not immune from regional changes. The Gulf states are very well entrenched in their stability because of the historical legitimacy and because they have dialogue and all forms of accessibility between leaders and their people.

But we are living in a globalised world, and one of the demands of globalisation is to open up and to build a modern state.

The GCC has proved to be a very successful experience, but I would like to see it move from corporation to federation. I think there is more acceptance of this than was the case two years ago.

One of the hard-learned lessons of the Arab Spring is that no country is immune from the wave of changes that swept the region. Change is the norm and the Gulf countries are not immune.

While this wave did bring positive changes, it should have been a wake-up call to all countries and all governments that change can happen.

The Gulf countries are located, in a geographical sense, in one of the hottest regions in the world. Several countries in the Arab region have gone through a lot of changes. I think the first lesson that we all have witnessed was in Iraq.

We shouldn’t forget what happened in Iraq. It is a country that was so advanced and civilised, and now security has become a huge issue.

The same scenario is repeated in countries such as Syria.

This explains why Omani foreign policy chose a different path from the rest of the GCC states.The approach was clear: If Syrians have an issue with their government, they should sit together and resolve it. We cannot bring people from outside to make changes inside Syria. This is the quickest way, but not the most successful way.

In Yemen it is different, but it was also a case of outside intervention. And we shouldn’t deny people the right to decide what government they want. We cannot assume that we know what they want.

I think domestic threats are the number one challenge facing the GCC region. What I mean is that people are no longer satisfied with the policies of their own states.

As President Obama said recently, the Gulf states have threats more inside their countries than from outside, and I believe what he said is right.

The other threat on the list is oil revenues, on which we were dependent. Oil prices plunged from $120 to below $40 a barrel. And we always had been the land of plenty. Now the way we experience it, in Bahrain at least, is that there will be a huge policy shift to start charging people with taxes, because in the Gulf region we don’t have taxes.

Bahrain is, of course, dependent mainly on Saudi Arabia and the UAE for financial assistance. Now they also have their own financial problems to settle besides the war in Yemen .

Also the changing demographics of the GCC region as a new generation of youth is emerging. Those young men and women, most of whom are educated, have different expectations and I think they will make the change.

This explains why we need to address the internal question differently. The ruling elites should consider introducing democratic reforms, not cosmetic ones – that is, if they want stability.

The most threatening challenge facing the Gulf states now is political and constitutional reforms. These reforms are the only way to adjust with changing circumstances locally and at regional level.

Everything has changed within the GCC region and its surroundings. Consequently, the political system in each of these states has to reciprocate and make changes and adjustments.

Second on the list of potential threats is the instability in Yemen, Iraq and Syria as well as the role played by Iran in exacerbating many of these conflicts.

The third problem is sectarianism, and how to approach this issue. Singling out ISIL and making it the only target of the war on terrorism could backfire seriously, simply because ISIL is part of a larger problem.

We should work on convincing the Iranian to abandon the notion of sponsoring sectarian militias across the region. That requires dialogue – in the end we will have to dialogue with the Iranians.They claim that they do not intervene in the affairs of any state and that they are with the political unity and the sovereignty of each state, but this is not true.

One of the key challenges is to come up with a clear strategy on how to fight ISIL. There is no strategy, neither with the GCC nor with the Americans or anyone else. Everyone just wants to hit ISIL, and that is stupid. I always call it the stupid war.

It did not succeed with al-Qaeda and it’s not going to succeed with ISIL. You have to have a strategy with the political military and economic elements. As I said, terrorism went through two phases. The first was the Afghanistan phase. The second phase began after 2003, with sectarianism being the main source of terrorism.

You cannot go after the symptoms and forget the phenomenon itself and its roots. 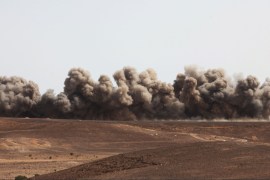