The group of islands was used by the Houthis to store and smuggle weapons into Yemen, the alliance and local fishermen said.

The coalition said its forces “cleansed Greater Hanish”, the biggest island in the archipelago in the Red Sea’s main shipping lanes, according to Saudi state television.

Fishermen told Reuters news agency by telephone that the islands had been under heavy shelling by Arab forces for weeks before they were seized.

The coalition has been trying to dislodge the Houthis and forces loyal to their ally, former Yemeni President Ali Abdullah Saleh, from areas captured since last September and to restore President Abd-Rabbu Mansour Hadi to power.

The group of islands was the subject of a territorial dispute between Yemen and Eritrea, which seized them in the 1990s, until the London-based Permanent Court of Arbitration granted Yemen sovereignty in 1998.

What makes the group of islands strategically significant is its proximity to the southern side of Bab-el-Mandeb which connects the Red Sea to the Gulf of Aden. It forms a strategic link between the Indian Ocean and the Mediterranean Sea via the Red Sea and the Suez Canal.

Meanwhile, Gulf Arab states called for an international reconstruction conference for Yemen after any deal to end its civil war, which has killed nearly 6,000 people and caused widespread damage to the country’s economy and infrastructure.

The call came in a statement by Gulf Cooperation Council (GCC) leaders at the conclusion of a summit in the Saudi capital, Riyadh, on Thursday.

ANALYSIS: Beyond the fragile peace in Aden

Yemen’s warring parties are due to gather in Switzerland next week for United Nations-sponsored peace talks.

“The council [GCC] members called for an international conference for Yemen reconstruction after the parties reach the aspired political solution,” Abdullatif bin Rashid al-Zayani, the GCC secretary-general, said in the statement.

He said that would be done in accordance with a “practical programme to rehabilitate the Yemeni economy and to ease its merger into the Gulf economies”.

A seven-day ceasefire is supposed to take effect when the peace talks start on December 15. 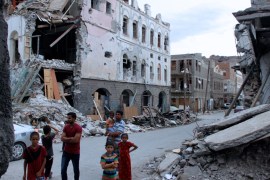