Two bombings in different parts of Iraq’s capital Baghdad have struck groups of Shia Muslims taking part in an annual religious pilgrimage, killing at least 15 people and injuring 38 others, Al Jazeera has learned.

One of the attacks on Monday hit a checkpoint in Saiydiyah district along a route used by pilgrims travelling to the city of Karbala for the “Arbaeen” commemoration, killing nine and injuring 21 others.

According to the Associated Press news agency, police said four soldiers are among the dead.

OPINION: The Arab world is at war with itself

Police told Al Jazeera that another blast struck pilgrims in the Shaab neighbourhood, in the city’s north, killing at least six and injuring 17 others.

No groups immediately claimed responsibility for the attacks.

They were the first attacks on Shia pilgrims in Baghdad during the lead-up to Arbaeen, which is often marked by violence despite tight security measures to protect the pilgrims, many of whom travel to Karbala by foot, the AP reported.

Arbaeen marks 40 days after the Ashoura anniversary, commemorating the slaying of Imam Hussein by the armies of the caliph Yazid in 680 AD.

In a separate development, Iraq’s military called on civilians in the ISIL-held city of Ramadi to leave – a sign that an operation may soon be under way to retake the provincial capital.

Monday’s statement, broadcast on Iraqi state TV, said that all families in Ramadi are requested to leave the city from its southern, Haimaira area.

It is unclear if the long-awaited operation to recapture the city is imminent.

Earlier in the day, Iraqi army shelling killed at least five civilians in Fallujah and an ISIL suicide attack north of the city left at least 13 Iraqi soldiers and militia fighters dead.

The US-led coalition has carried out at least seven air strikes near Ramadi over the weekend, targeting key positions and weapon caches of ISIL fighters. 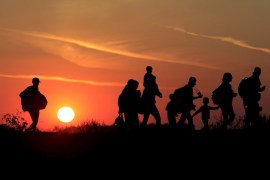 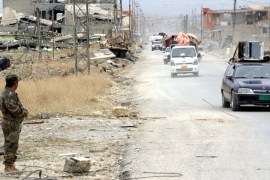