An Amnesty International report has detailed how the Islamic State of Iraq and the Levant (ISIL) group obtained the bulk of their vast arms supply from the Iraqi army.

ISIL, which seized large swaths of Syria and Iraq in recent years, has obtained a significant portion of its weapons from capturing key military bases in both countries.

Hassan Hassan, an associate fellow at the UK-based think-tank Chatham House and co-author of “ISIS: Inside the Army of Terror”, confirmed that most of ISIL’s weapons had been seized from the Iraqi and Syrian armies.

But he told Al Jazeera that the group also buys arms from the black market – the same one that Syrian opposition forces buy from – and said that in some rare cases, ISIL buys weapons from the rebel factions.

The Amnesty report focused on how the majority of ISIL’s weaponry originated from the supply to and mismanagement of Iraq’s military over the past five decades.

Iraq’s accumulation and proliferation of arms dates back to the 1970s and 1980s – when at least 34 countries – led by Russia, France and China – transferred billions of dollars’ worth of military equipment to Iraq, the report said.

READ MORE: The ugly threat of ISIL with chemical weapons

“This was at a time of extreme volatility, when Iraq was at war with Iran and the Iraqi armed forces were committing widespread” human rights violations.

The US-led coalition’s 2003 conflict with Iraq led to the disbanding of the Iraqi military that resulted in the further misappropriation of arms by soldiers. Iraqi civilians and armed groups that emerged following the US war also looted Iraqi military and police caches.

“From 2003 to 2007, the US and other coalition members transferred more than one million infantry weapons and pistols with millions of rounds of ammunition to the Iraqi armed forces, despite the fact that the army was poorly structured, corrupt and ill-disciplined”.

“Hundreds of thousands of those weapons went missing and are still unaccounted for. During this period, illicit markets flourished, as did covert supplies from Iran, making arms and ammunition readily available to armed groups operating in Iraq.”

READ MORE: Did the US occupation create ISIL?

The report blames the US-led coalition for failing to act to prevent human rights abuses, control arms stockpiles, disarm Iraqi soldiers after the army was disbanded and safeguard against the appropriation of weapons by armed groups.

Amnesty says that in order to effectively curb the proliferation and misuse of arms in Iraq, the international community must adopt and enforce stricter controls on the export of arms to the country. 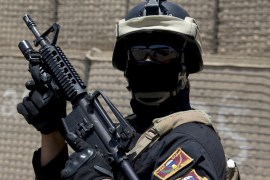 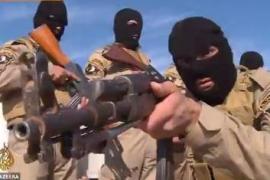 ‘ISIL is losing’: Iraqis optimistic for 2015

Circumstances of battle have changed in favour of Iraqi troops since June, local security officials say.