Kuala Lumpur – Malaysia’s beleaguered prime minister faces a crucial test as his political party’s general assembly kicked off on Tuesday with criticism mounting over corruption allegations and an unexplained $700m payment that landed in his private bank account.

Prime Minister Najib Razak has been under fire since the “donation” came to light, along with billions of dollars in debt built up by state investment fund 1Malaysia Development Berhad (1MDB).

The scandals have transfixed Malaysians for months.

Despite a profusion of domestic and international investigations – including by the FBI and Hong Kong police – there have been few answers.

The prime minister has denied any wrongdoing at 1MDB. He insists the $700m payment – originating from the Middle East and first reported in July – is legitimate.

Najib was questioned for the first time by the Anti-Corruption Commission on Saturday. Despite it all, the prime minister has remained steadfast and has rejected calls for his resignation.

“Yes [my conscience is] absolutely clear. I have done what I feel with full responsibility and I am confident that after the investigation is completed, the truth will prevail. InsyaAllah,” he was quoted as saying on Tuesday.

At the end of July, he reshuffled his cabinet and removed those who knew the most about 1MDB, including Deputy Prime Minister Muhyiddin Yassin. Najib appointed Nur Jazlan Mohamed – a party backbencher chairing a parliamentary inquiry into 1MDB – as deputy minister.

Najib also replaced the attorney general who was leading an investigation into 1MDB.

“See what a powerful prime minister can do,” Terence Gomez, a professor at the University of Malaya, told Al Jazeera. “Where is the check and balance? Even the speaker [of parliament] has refused to debate it.”

Over the coming days, Najib will face his party – the three million-strong United Malays National Organisation (UMNO) – whose annual assembly opened on Tuesday. The event has often been the scene of pivotal moments in Malaysian politics.

Even before the 1MDB scandal broke, the party had struggled to maintain its previous levels of support. In the 2013 election, it lost the popular vote for the first time.

Former Prime Minister Mahathir Mohamad continues to pressure Najib from the sidelines. There have been rumblings too from ordinary members. With the potential for trouble, indications are that the proceedings, and media coverage, will be tightly controlled.

“Najib is trying to survive and I think he will survive for quite some time,” said Oh Ei Sun, a fellow at the Rajaratnam School of International Studies, who once worked in Najib’s office. “There’s no [party] election, but he does not want to risk any sabotage or people making sudden statements.”

Mahathir, who stepped down from office in 2003 after 22 years in power, was questioned by police last month over his comments about Najib and 1MDB. But that has not deterred him and the 90-year-old continues to use his blog to lambast a man he once groomed for office.

“It is not just the amount of money,” Mahathir said in an interview with Al Jazeera at his office in Putrajaya. “It’s the people involved that has created this kind of atmosphere of fear, of a loss of faith in the government. I think he needs to go. There are too many things he has done which are wrong.”

Mahathir said he has “no confidence at all” in the ongoing investigations. “It can only be found out if Najib has no power. In other words, if he steps down.”

Some local UMNO leaders have also been making life difficult for the prime minister.

Anina Saadudin, a party official from the resort island of Langkawi, was expelled after calling for Najib to explain the donation, and launching a lawsuit against him.

The financial scandals have come at a difficult time for Malaysia.

Over the past year, economic growth has eased, hurt by the slowdown in China and the falling price of commodities. The economy expanded in the third quarter at 4.7 percent; the slowest in two years. The ringgit remains Asia’s worst performing currency this year and many Malaysians are feeling the pinch from the rising cost of living.

A survey released in October by the pollster Merdeka Center showed deep dissatisfaction with the government. Its overall approval rating slumped to 23 percent, the worst since the survey started in 2012.

Worse, only 31 percent of ethnic Malay voters – UMNO’s core constituency – said they were satisfied with the government.

For Saifuddin Abdullah – a former deputy minister in Najib’s cabinet who once sat on UMNO’s supreme council – the events of the past few months triggered his final break with the party he thought he would never leave.

“It is not just about one person,” Saifuddin told Al Jazeera. “The party seems to be okay with it [the scandals]. That is a problem when the whole world is saying it is not okay.”

Saifuddin also resigned his position as CEO of the Global Movement of Moderates, a group founded by Najib. 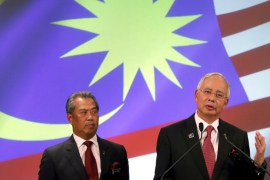 Najib Razak announces cabinet reshuffle after his deputy asked him for explanation of alleged fraud at investment fund. 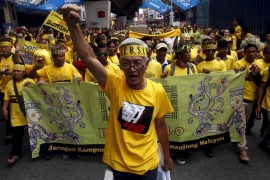 Demonstrations held for second day in Kuala Lumpur to demand the resignation of PM Najib Razak over graft allegations.